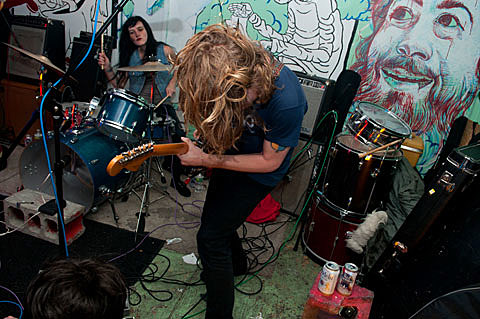 Today we learned that beloved, long-running Brooklyn DIY venue Death By Audio is closing. It felt inevitable but we sure hoped it wasn't going to be so soon. Though we didn't mention it earlier, our first thought was that it might be related to reports earlier this year that VICE, who just received another $500 million in funding (!), is expanding and taking over the 60,000 sq.ft. building at the corner of S2 and Kent (NYC gave them $6.5 million in tax credits not to move out of the city).

Gothamist wondered about DbA too -- Death By Audio had no comment on the situation, but it's hard to believe the two situations are not at all related. Right now it is pure speculation. We just hope Glasslands doesn't suffer the same fate (they're in the same building too).

Meanwhile, DbA is open for another two-and-a-half months and they're promising to "swing for the fences" as far as final shows. (Will Ty Segall squeeze in one more DbA show next week?) One show that's a guaranteed don't miss is JEFF the Brotherhood on 10/12. Tickets are still available.