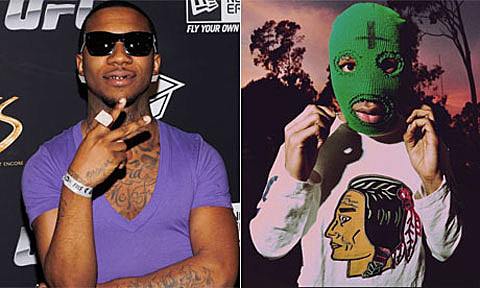 On the other hand, Lil B caused a furore - and attracted death threats - last month when he announced his forthcoming album would be titled I'm Gay. Though the former Pack member is straight, it's hardly out-of-character for a rapper who specialises in stream-of-consciousness surrealism. His penchant for blurring gender and sexuality lines is already well known, whether exclaiming "Damn, I'm a princess" mid-freestyle, referring to himself as a "pretty bitch" or throwing down the gauntlet to the biggest female rapper around: "Nicki Minaj, I'm the finest bitch out!" And with songs entitled I'm God, I Am the Ocean and I'm Paris Hilton, I'm Gay is less of a grand statement than it might appear.

Thousands of words have been expended on Odd Future's lyrical content and What It All Means since their rise to prominence over the past year, but only now - as lead member Tyler, the Creator gears up for the release of his second album Goblin - have they been pressed to explain themselves. Which, in recent interviews, Tyler has done in a particularly mealy-mouthed fashion. "I'm not homophobic," he declared to NME last week. "I just think 'faggot' hits and hurts people." It would appear that Tyler's much-vaunted genius does not stretch to making a connection between these statements. Notwithstanding his inability to distinguish between active and cultural homophobia, though, it's important to remember that Odd Future is not a monolith. Frank Ocean, their R&B associate, has penned a song with an explicitly pro-gay marriage slant: "I believe that marriage isn't between a man and woman, but between love and love." And the collective's sound engineer, Syd tha Kyd, is an open lesbian whose response to the controversy is telling: "When I first started really fucking with Odd Future heavy, my dad was like, 'Really? They talk about some crazy shit and as a female, you're slapping a lot of women in the face.' I'm like, 'That's what I do. I slap bitches.'"..." [Guardian]

RELATED: Tyler the Creator was featured heavily in Sunday's NY Times, and "Thurnis Haley Golf Wang" is now up to Part Three. All three videos below...