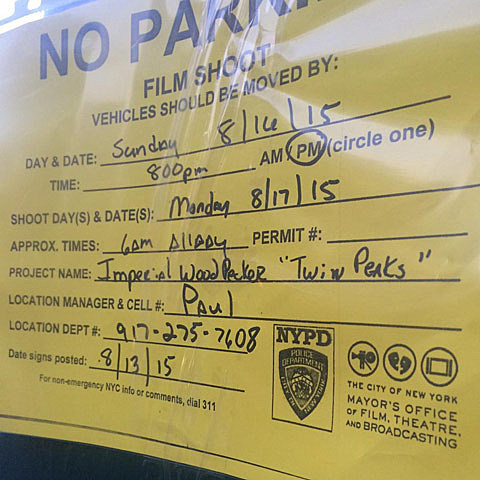 As you may know, Showtime's Twin Peaks reboot is set to start filming soon, mostly in Washington State. But there is something happening in Brooklyn right now. Yellow film shoot signs are up all over 5th Ave in Park Slope with "Imperial Woodpecker 'Twin Peaks'" in the project name slot. According to DNA Info, they're shooting at Grand Prospect Hall which is up there with the most David Lynch place in all of NYC ("We make your dreams come true"). Compare an '80s GPH commercial with Twin Peaks, below. Grand Prospect Hall owner Michael Halkias told DNAinfo that "hundreds of people" are at Gph filming, with super-tight security. "We are under total occupation." Whether it's the actual show, or perhaps just a promo/commercial (Imperial Woodpecker is a commercial production company) remains to be seen. Stay tuned.

Main shooting on the new Twin Peaks is scheduled to start in September with an expected air date now pushed back to 2017.

And in other other news, the GPH folks have opened the 17,000 square foot Brooklyn Bavarian Biergarten right next door and it's open Tuesday - Sunday. Has anybody gone to that yet?