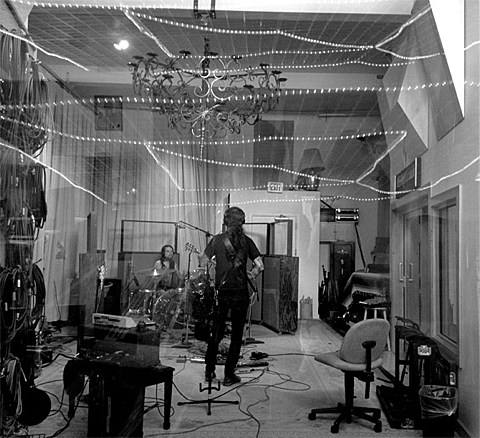 Former Isis singer -- AND NOT A TERRORIST -- Aaron Turner has formed a new band with Baptists drummer Nick Yacyshyn and bassist Brian Cook (Botch, These Arms Are Snakes, Russian Circles). The trio have named themselves Sumac and will be releasing their debut, The Deal, on Profound Lore Records and SIGE Records in February 2015. To complete the mini-Hydra Head reunion -- Turner's label that released some of Cook's previous outfits -- Kurt Ballou mixed the album because of course he did. (Mell Dettmer, who has done work for Sunn 0))), was the producer.) You can find the track listing below.

According to Turner, this is no side project:

We are pursuing this as a fully functional band rather than side project, with plans to play live in the coming year and continue with further writing/recording thereafter.

Might we suggest a tour with Mutoid Man? For old times' sake.

The The Deal tracklisting appears below...

Filed Under: Baptists, Botch, Isis, Russian Circles, Sumac, These Arms are Snakes
Categories: Heavy Metal News, Music News
Comments
Leave A Comment
Thrice tell us about their 10 favorite albums of 2022
Cave In name their 10 favorite albums of 2022
Minus The Bear albums ranked from worst to best
David Knudson (Botch, Minus The Bear) teams with Cursive’s Tim Kasher on new song (listen)
Botch announce first shows in over 20 years!
Botch played their first show in 20 years in Seattle (video)