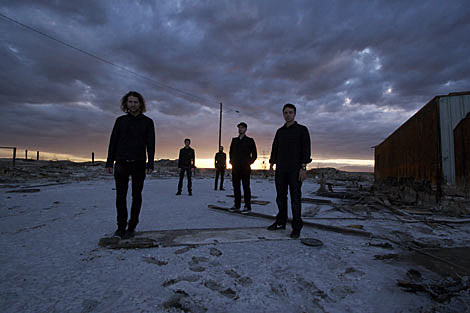 Isis have announced dates for their US tour in support of their upcoming album Wavering Radiant, due on May 15th via Ipecac Records. Full tour dates are below, including a June 2nd date at Irving Plaza which goes on sale 4/4 at noon.

Wavering Radiant, the band's fifth album and first since their 2006 release In The Absence of Truth, is produced by Joe Barressi (Melvins, Kyuss, QOTSA) and features Adam Jones of Tool on two tracks. The record is seven tracks long and spans 54 minutes, including the track "20 Minutes / 40 Years" which lasts neither. Check that track out for download above. For y'all vinyl heads (like me), Conspiracy Records will do the honors (preorders start April 1), dropping a 3000 copy pressing of the gatefold 180 gram 2LP on April 21 in multiple flavors: 100 transparent blue, 400 solid dark blue, 1000 solid yellow, and 1500 black. For more on the album, check out the studio footage below and download the podcast with Aaron Turner above.

Tool was recently announced as part of the 2009 APW lineup and rumored to play Lollapalooza.

Video and tour dates below...