Isis at Irving Plaza in 2009 (more by Paul Birman) 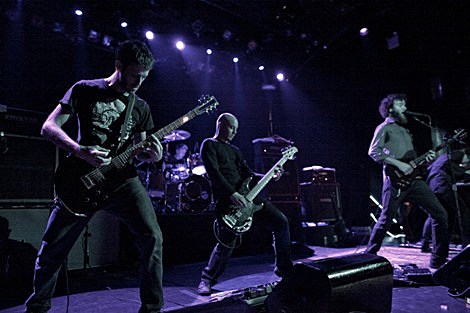 The influential hardcore/post-metal band ISIS, now disbanded, is unfortunately being confused with the terrorist group of the same name. ISIS (the terrorist group), which stands for the Islamic State in Iraq and Syria, has shocked the world with a rapid expansion of a so-called caliphate in recent weeks, and for its brutal killings of Shiites and minorities including Christians, Yazidis, and more. Last week, ISIS militants claimed responsibility for beheading the American journalist James Foley, a turning point in the United States' stance towards the group, which led to Defense Secretary Chuck Hagel calling ISIS "beyond just a terrorist group" and "beyond anything that we've seen."

Some have mistakenly directed their anger at the terrorist group at the band instead. In an interview with ABC, Isis's drummer Aaron Harris said the attention caught the band off guard and that the band has received "off-color comments" on their Facebook page, which the band has changed to "Isis the band." (Their website similarly is Isistheband.com) Fans have also emailed the band saying they are reluctant to wear the band's shirts in public as they have received "off-color comments."

A representative from the band's label, Ipecac, told ABC that, "It is an unfortunate situation and of course a few less than enlightened people are not seeing the distinction between an inactive band of musicians and a band of terrorists involved in current world affairs."

Isis the band included a number of members of the post-metal band Palms as well as Aaron Turner of Hydra Head Records. Palms, which also includes Chico Moreno of Deftones, are touring soon. Check out all dates listed below...