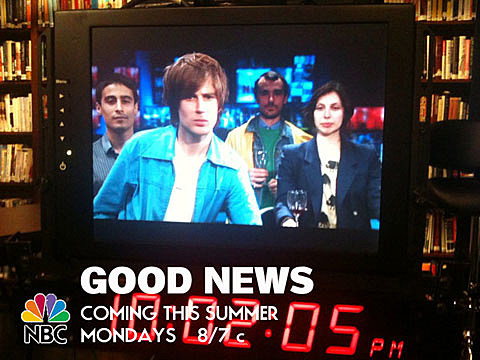 Islands, (one of) the post-Unicorns projects of Nick Thorburn/Diamonds, has been almost totally quiet since the band canceled their European tour at the beginning of 2010. They are signed on to the tentative, possibly doomed Mountain Man Festival in Saratoga Springs on July 24th, and Nick has been busy on Twitter, which is where the above picture is from. Its caption reads: "here's a promo for my NBC dramedy airing this summer at 8/7 central. Make sure you tune in!" In January Islands released a new video featuring Michael Cera. The song was from their Anti-released album that came out in September. Their last NYC show was part of that supporting tour at Bowery Ballroom in the beginning of November.

Consider the band one step closer to active duty - they have a confirmed show at Music Hall of Williamsburg scheduled for Sunday, June 27th. It's part of the second annual Northside Festival. The four-day Fest is in the process of being announced, but we now know all four Music Hall shows:

Tickets to three of those shows go on sale Friday at noon. All four were supposed to go on sale Friday, but our show didn't make it through Ticketmaster's system on time so the on sale has been moved to Saturday.

Nick posted a free song called "Gone Bananas" on his website with a note, which is pasted below with another solo song and other videos...

"I recently completed this song, "Gone Bananas" for my upcoming solo record, entitled I am an Attic, which I plan to release in some way, shape, or form, fairly soon. For now, you can stream Gone Bananas here, or go here to download the song and keep it safe on your personal computer device. But most of all, enjoy." - Nick