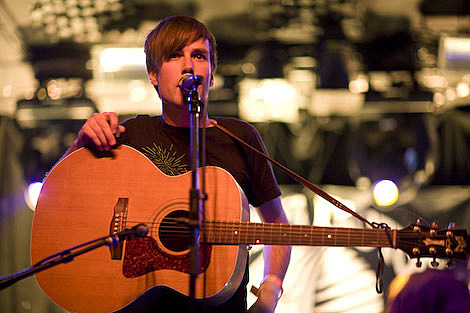 Oh, hey guys. Lemme get these headphones off. There. Sorry, I've been listening to this Justing Bieber song that's been slowed down 800 percent non-stop since yesterday (sounds like a Justin K. Broadrick remix for crying out loud). Anyway, I almost forgot to tell you about some more very important comedy news. Keeping with the theme of great comedy coming to Brooklyn, Williamsburg's weekly Wednesday night comedy staple Big Terrific will leave the confine's of Cameo and grace the much larger stage of Music Hall of Williamsburg on Friday August 27th (8:00pm doors). For the uninitiated and/or too-lazy-to-google, Big Terrific is a weekly show hosted by Max Silvestri, Gabe Liedman, and Jenny Slate that showcases local talent as well as international comedic super stars. It is one of the many great weeklies in NYC, and it boasts one of NYC's most consistently stellar comedy line-ups, week after week after week, and has been doing so for over two years.

As far as I'm concerned, all really great comedy shows in NYC deserve to get dragged out of the back rooms and basements and given the opportunity to curate a larger scale show at one of our better venues (like Invite Them Up did at Bowery... 5 freakin years ago!? (5 years!? damn)). And the Big Terrific show at MHOW seems like the ideal scenario. It's on a Friday. It's on a payday (for some of us). It features the comedy whatnots of Todd Barry, Brent Sullivan, Joe Mande, Jesse Popp, and MORE. It features a live performance by Islands. It'll have a shitload of surprises that cannot be publicized because that's how the industry works people. It's ONLY 12 BUCKS. So if you're into amazing comedy, jaw dropping surprises, reasonably priced beer, great music, at a wonderful venue (that is turning three years old), I'd say your Friday night is covered. And if you don't like any of those things, I'm wondering why you read this far. Shouldn't you be opposing a mosque somewhere or something? Anyway, times are tough, so if you'd like to try and win a pair of tix, look below.

In addition to Big Terrific, your hosts Max, Gabe, and Jenny are pretty busy pups. SNL keeps Jenny very busy, but she will be returning to the new season of Bored to Death on HBO, which premieres in September. She also just released a short film she made with Dean Fleischer-Camp called Marcel the Shell with Shoes On. Gabe Liedman can be seen on the Short List on Fridays at 9 on VH1. And Max just finished filming a pilot for Comedy Central that will hopefully get picked up and then air for thirty years. Following the MHOW show, you can count on Big Terrific every Wednesday at Cameo.

Some videos (and the contest details) below...

TO WIN FREE A PAIR OF FREE TICKETS to the Big Terrific at Music Hall of Williamsburg on Friday August 27th, e-mail BVCONTESTS@HOTMAIL.COM (subject: Big Terrific). Include your first and last name. Winners will be picked at random and contacted with instructions. Good luck!