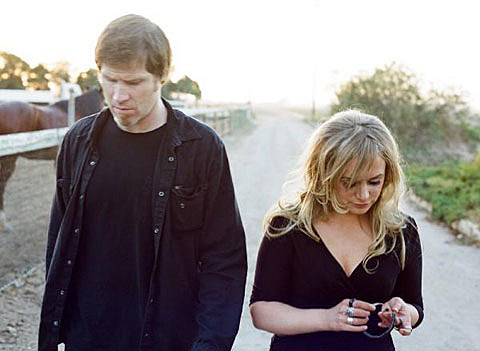 "We don't really talk about it but there's a trust thing there. He's a friend. He's a dear friend, and I know he's said the same of me. It's just about good music and singing with this man that's my friend, and it's an honor for me that he will sing stuff that I wrote, that he respects me. I think we're both interested in songs and we'll talk about... sometimes I'll say, 'I really like your songs' and he'll say, [imitates Lanegan's deep voice] 'No, I really like your songs,' and we'll just go 'Awwww...' [laughs] I think there's an understanding between us that's hard to put into words." [Isobel]

As previously mentioned, Isobel Campbell & Mark Lanegan are playing shows in support of a new album called Hawk. Two of those shows happen in NYC this weekend: Saturday/tonight (10/16) at Bowery Ballroom, and Sunday at Music Hall of Williamsburg. Both are with Willy Mason and both still have tickets available. Updated tour dates below...