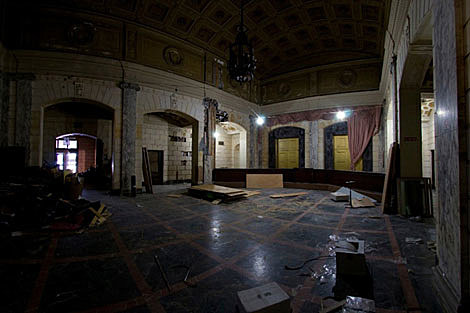 This Sunday, April 11th, will be the first public concert at 110 Livingston St, Issue Project Room's soon-to-be-new space. The renovations on 110 Livingston, for which the nonprofit was called to raise $2.5 million ("well over half a million" of which they still need), aren't complete yet. All other upcoming events are still at the Old American Can Factory, while the new space is expected to open sometime this fall or later.

For this preview event, new music ensemble Ne(x)tworks will perform Morton Feldman's String Quartet No. 2 (a 6 hour piece) in its entirety. The free show starts at 11:30am and will be streamed live online through Q2.

[Issue writes]: String Quartet No. 2 has been performed in its entirety only a few times, the first being in 1999 by the FLUX Quartet at Greenwich Village's Cooper Union. The Ne(x)tworks quartet (which includes Cornelius Dufallo and Kenji Bunch, formerly of FLUX) will play the entire piece by candlelight in the cloistered hall while audience members are invited to stay for as long as little as they like. The beauty of candlelight is also a necessity as the space is still raw, in need of renovation and lighting.

As part of their continued fund-raising efforts, Issue will be repeating their Soundwalk-a-thon benefit, which premiered last year, on Sunday, June 27th. At the event, musicians, artists and other walk leaders (last year they included Marc Ribot & Kurt Gottschalk) take groups on routes through the city to experience sound (or create it in some cases) in unique ways...

"Two dozen people signed up for a soundwalk with Betsey Biggs, a young Princeton-trained composer and interdisciplinary artist who often creates site-specific performances. Beforehand, Biggs directed participants to a Web site where they could download "Detox Project," an electronic piece that she had assembled for the occasion. It consisted largely of sounds recorded in and around the murky old Gowanus Canal, in Brooklyn: machine noises, trucks backing up, the bell of a rising drawbridge, sirens, pedestrian chatter, and, for a long while, a voice softly humming a childlike, three-note melody.Late in the afternoon, we met at a boarded-up house at the corner of Third Street and Third Avenue and began following Biggs's lead, listening to "Detox Project" on earphones. The streets were deserted, except for a few hipsters pushing strollers. It was unsettling to hear loud sounds without seeing their source. Conversely, certain noises that seemed to emanate from the soundtrack actually came from real life: I was surprised to see live birds in a dead tree. The experience proved to be psychologically complex, exposing how we orient ourselves with our ears. And, as Biggs notes in her Princeton dissertation, this kind of work plays off Internet-era listening habits--the use of manicured playlists to create what she calls a "cinematic lull," a "solitary dream state." When the walk curled through the quiet streets of Carroll Gardens, the collage of noises subsided and the human voice took over. Biggs began banging on a tin drum that she'd brought along, and a friend played an accordion. An electronically mediated experience veered toward old-time music-making. At the end, we stood on the Third Street drawbridge and applauded the composer, who smiled bashfully, nodding toward the strangely beautiful ruined landscape behind her." [New Yorker]

You can propose a walk of your own at their site. Videos from last year's soundwalks are below...