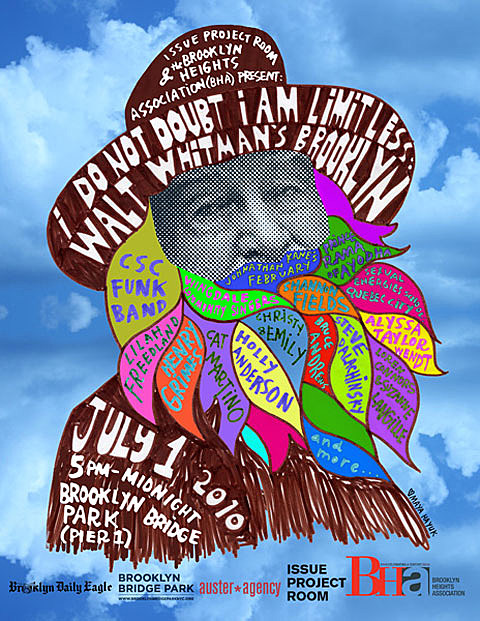 ISSUE Project Room celebrates The Brooklyn Heights Association's 100th Anniversary with an event that will program channel the psychedelic spirit of poet, journalist, humanist and Brooklynite, Walt Whitman, set against the stunning waterfront backdrop on the Pier 1 Harbor View Lawn of the new Brooklyn Bridge Park on July 1st at 5 pm until midnight.

Musicians and bands including the Wingdale Community Singers, Christy and Emily, Prince Rama, and others will perform original work along with new pieces set to a marathon reading of "Leaves of Grass," recited by some of the nation's most intriguing poets.

It's one of three shows on the schedule for the CSC Funk Band: another is Shea Stadium's July 4th BBQ-stravaganza. And the third is an August 6th show at new Park Shop venue the Rock Shop (its grand opening week) with Kings Crescent and Superhuman Happiness. A new CSC track, "A Troll's Soiree," just went up on online through their label, Electric Cowbell.

CSC played an ISSUE Project room show with Syrian singer Omar Souleyman on June 27th in the courtyard of Old American Can Factory (where more shows will be happening). That was Souleyman's second ever NYC show - the first being the day before at Cenral Park (pictures from that SummerStage show are coming shortly).

The full lineup for their July 1st Walt Whitman tribute (directions to Brooklyn Bridge Park are here) below...