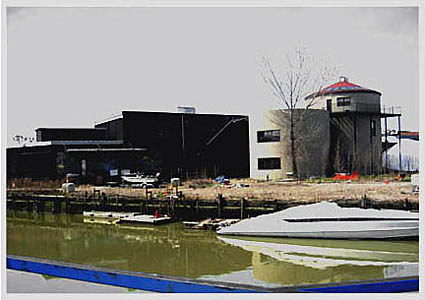 SHARE celebrates ISSUE Project Room's final night in their current location – the unique silo on the banks of the Gowanus Canal. To celebrate IPR's time in the silo and their move to a new space, SHARE will run a multimedia open-jam, inviting everyone and anyone to join, including those who have performed at, visited, or simply love IPR. It will utilize Stephan Moore's 16-Channel Hemispherical Speaker System and IPR's cylinder structure for visual projections both inside and outside the space. Please come to play, hang out, or participate in many toasts! [Issue Project Room]

I heard from my reliable source the move has something to due with the fact that the Gowanus Canal's flushing system is shutting down for repairs for an extended period of time and the big stink that will ensue. [Only The Blog Knows Brooklyn]

More information from that NY Times article that had Dan Deacon & Todd P in it.....

Perhaps the biggest wow factor lately comes from seeing a show at a former oil silo on a stretch of the Gowanus Canal in Brooklyn.

Occupied for the last two years by Issue Project Room, an experimental arts organization, the silo is hidden behind an imposing metal gate with a small sign just off the Carroll Street bridge. Between the lapping (if occasionally stinky) water, the courtyard filled with poplar trees and the warm glow emanating from the two-story performance space — the top floor is reached by an exterior metal ladder — it’s as far from mainstream clubland as you can get.

Rebecca Moore, a singer and violinist active in the protests over the closing of the Lower East Side club Tonic, performed at the silo last week. “I am very grateful for Issue Project Room,” she said from the stage: a rug at the front of the room. “We couldn’t get away with playing staplers at many other places.”

And that’s exactly the point, said Suzanne Fiol, the founder of Issue Project Room. “We are trying to be a breeding ground for experimental work, and we need spaces like this to nurture it,” she said.

(Issue Project Room will leave the silo in July, but another group, MeanRed Productions, will move in. An outdoor concert series is planned; Nicodemus, a D.J. and founder of the traveling party Turntables on the Hudson, is already booked for Turntables on the Gowanus.) [reprinted at Failed Pilot]