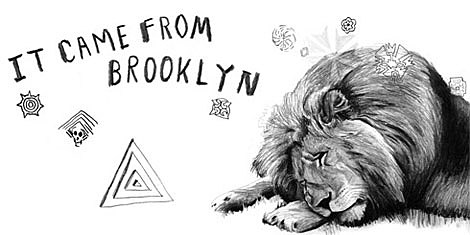 Tickets for the first show of the Guggenheim's It Came From Brooklyn series on Friday, August 14th are on sale now. They cost a whopping $45 for non-members, and museum members don't do much better with a reduced cost of $40. The night will feature sets from The Walkmen and High Places, and an opening performance by Brooklyn Steppers Marching Band. Hosting will be comedian Leo Allen; novelist Colson Whitehead "reads selections from Walt Whitman between performances." The next edition of the series is scheduled for September 25th. None of the acts have been confirmed.

Two days after on Sunday, August 16th, the Walkmen will playing a free Central Park Summerstage show with Dinosaur Jr.

More info on the It Came From Brooklyn series, below...

It Came from Brooklyn info

It Came from Brooklyn celebrates the Guggenheim's 50th Anniversary by showcasing Brooklyn's emerging and established talents in the fields of music and literature. Beginning on August 14 with headliners the Walkmen, the monthly concert series occurs through the fall and takes place in Frank Lloyd Wright's famed rotunda from 8 p.m. to 12 a.m., reinforcing its identity as a versatile, dynamic site for a variety of mutually invigorating art practices. Coproduced by Sam Brumbaugh, the series continues the recent tradition of acclaimed performances that have symbiotically activated the space: Marina Abramovic's Seven Easy Pieces (2005), Cai Guo-Qiang's collaboration with the Cloud Gate Dance Theatre (2008), and Meredith Monk's Ascension Variations (2009).

With comedian Leo Allen serving as MC, the August 14 concert kicks off with a special performance by the Brooklyn Steppers Marching Band, followed by opening band High Places, whose warm optimism and intricately layered songs have been described as "short studies in escaping urban claustrophobia" (Mike Powell, Pitchfork). Later, the Walkmen will fill the rotunda with the hypnotic ebb and flow of ramshackle guitar and upright piano, with bursts of beautifully anguished songcraft. Novelist Colson Whitehead reads selections from Walt Whitman between performances.

The second It Came from Brooklyn is scheduled for September 25.