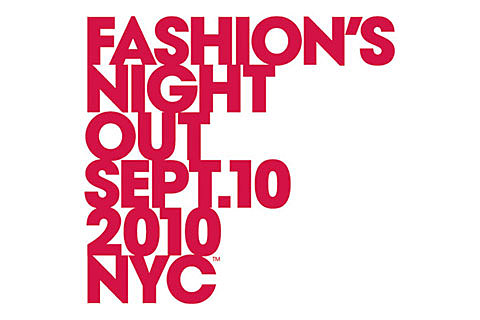 Fashion's Night Out means lots of shopping happening all over the city, and lots of special events. A full list is at the official website, and here are a few highlights...

Metric is playing at Juicy Couture' Fifth Avenue Flagship store at 8:30PM. They are also playing a fashion show on Monday.

VV Brown is playing the Teen Vogue and ASOS.com's Fashion's Night Out Block Party. "The event will be held on Bleecker St (btwn Perry and W. 4th) in NYC 6-11pm."

"As part of Vogue's "Fashion Night Out" Bear Hands will be playing at Rockefeller Center tonight, September 10. The show kicks off at 6:30 and previous to Bear Hand's set at 9pm Savoir Adore and Brahms will be playing. The stage is set up between 49th and 50th street and 5th and 6th Avenue."

"My Gold Mask will be premiering "I Don't Need The Reason" live during their performance at the Phillip Lim store for Fashion's Night Out in New York City today on Friday, September 10."

Dan Black is performing an acoustic set at Saks at 9:30pm, and DJing at Dior Homme from 7-9.

Karen Elson will play at 9pm at Balenciaga, West 22 Street, between Tenth and Eleventh Avenues.

Mick Rock is taking pictures at the Varvatos store.

"We will also have a live acoustic performance by British band Ramona at the Spring Street Burberry store."

Andrew Wyatt from Miike Snow is DJing a Theory party at 40 Gansevoort Street.