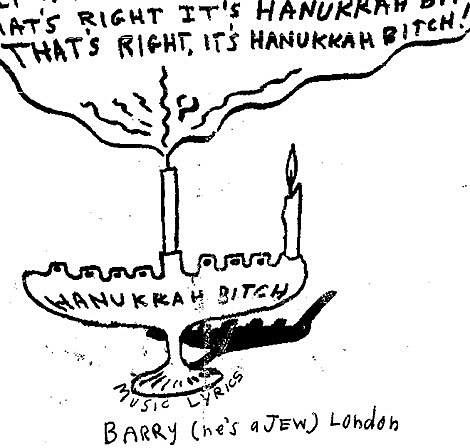 The above drawing is a segment of the songsheet Oneida passed out at Sunday night's show at Maxwell's in Hoboken (12/21). It was the first of eight Yo La Tengo Hanukkah parties at the NJ venue this year, and, as promised, the Brooklyn band (Oneida) opened the night. As also promised, comedian Paul F. Tompkins opened with a set of comedy. AND, I'm feeling really good right now because two (sort of) of my guest guesses also came true last night. Both Britt Daniel and Janet Weiss (I guessed Britt and "Quasi") joined Yo La Tengo for some songs. To quote an email I got from Josh,

Oneida opened.
Then Paul F Tompkins.
Then YLT with Janet Weiss
For the encore - Paul F Tomkins joined the band and sang a Hannukah version of [Johnny Cash's] "Ring of Fire"
Then Britt Daniel joined and sang a few songs including "Mother and Child Reunion" [by Paul Simon]

Anonymous adds that there were covers of P.I.L., Amy Winehouse and Burt Bacharach as well.

The shows continue tonight (Monday, Hanukkah night two). We now know the openers for night eight, but who will open tonight? Will it be Titus Andronicus? Will it be Antietam? I'm not sure. Post your guesses and facts in the comments.

Download the whole Oneida songsheet (thx Josh) as a PDF HERE. Check out a Yo La Tengo video from last year's Hanukkah run, below...