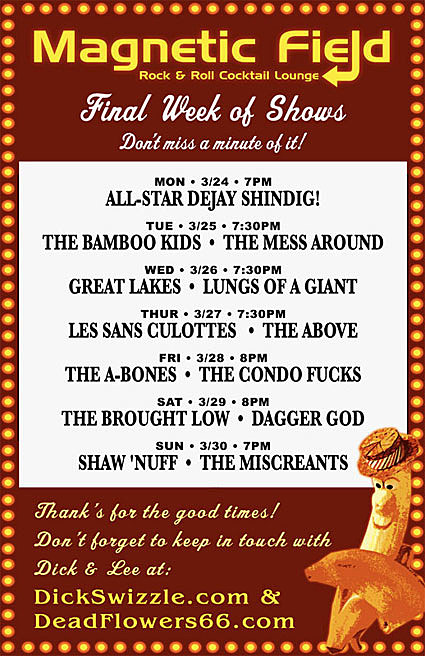 THU 3/27: 8PM / $7
Closing Week Blow-Out!!!
LES SANS CULOTTES
Les Sans Culottes are a throwback to la vie belle of the Parisian ye-ye days, offering girl/guy-driven vocals and a fuzzy, infectious undertow of mildly lunatic guitar/organ action!
THE ABOVE
The Above a young, enegetic NYC band whose music is heavily influenced by the British Invasion, as well as the '60s sounds of Motown, Chess, Stax, Atlantic, and the classic Nuggets compilation.
PLUS: DJ JUSTIN ANGELO MOREY (THE BLACK HOLLIES)

••••BUY TICKETS•••• FRI 3/28: 8PM / $8
Closing Week Blow-Out!!!
THE A-BONES
"The A-Bones are a Brooklyn-based five-piece that approach the sloppy greatness of rock'n'roll's past with a beer-addled enthusiasm that had nothing to do with "oldies" or "nostalgia" and everything to do with the primal impulse to play music that's fast, loud, and wild. Named for a tune by the Trashmen, the A-Bones are led by vocalist Billy Miller and drummer Miriam Linna (who previously bashed it out in the Cramps and Zantees), who are also the brains behind Norton Records." -All Music Guide
THE CONDO FUCKS
Of "Government Problem," "Fuckin' Gary Sandy," etc. fame.
PLUS: DJ PHAST PHREDDIE (SUBWAY SOUL CLUB) SAT 3/29: 8PM / $7
Closing Week Blow-Out!!!
THE BROUGHT LOW
DAGGER GOD