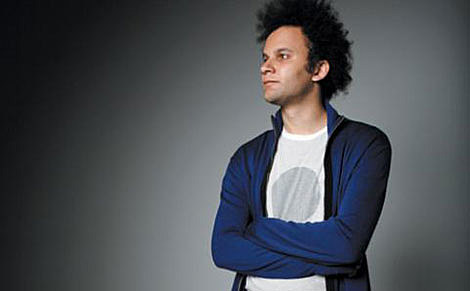 "The prospect of an established rock musician venturing into classical territory will probably always raise eyebrows, and rightly so. It takes a major leap of faith to view Paul McCartney's Liverpool Oratorio or Billy Joel's Fantasies & Delusions as anything other than a misguided stab at legitimacy.

Fortunately, Central Market, a new album of compositions by Tyondai Braxton--best known for his work with the innovative instrumental-rock quartet Battles, which plays this week as part of Warp20, an anniversary celebration for its esteemed label--falls on the extreme opposite end of the spectrum. No puffed-up vanity project, this set of lush, highly kinetic pieces, performed with the Wordless Music Orchestra, ranks among the year's most forward-thinking releases. And despite its grand scope, sci-fi-esque weirdness, cryptic titles and dearth of lyrics, the album is surprisingly accessible. For fans of Battles, this brand of listener-friendly experimentation shouldn't come as a shock: Despite its considerable oddness, the band's last effort, 2007's Mirrored, stunned the indie-rock set with its furiously funky rhythms and crystalline melodies." [Time Out]

Central Market is out on September 15th via Warp Records. Battles plays with !!!, Flying Lotus and Pivot tonight (9/4) at Terminal 5. Set times below.

And the Warp Records festival continues on Saturday with two shows. First is the free show at the World Financial Center that Flying Lotus was supposed to play before he was switched to the Terminal 5 show. The new lineup will "include sets from electronic masters Jimmy Edgar, Hudson Mohawke and Clark, as well as Warp DJs." The party continues Saturday night at Le Poisson Rouge with a show by Jamie Lidell, The Hundred in the Hands and Born Ruffians. Maybe because of the late set time, last minute notice, and holiday weekend, but tickets are still on sale.