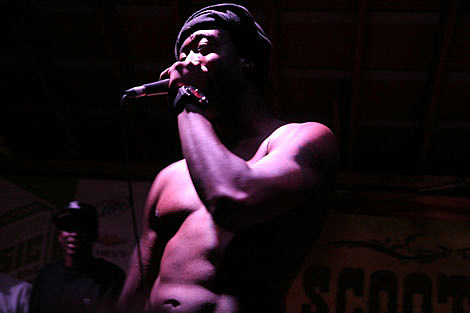 Surprise guests Talib Kweli and Hi-Tek joined Cole on stage for "Just to Get By," but the highlight of the night was when Cole brought out Young Gunz rapper Young Chris. "We don't wear the same chain, but, I gotta give respects to those that came before me, from Beanie to Young Gunz," J. Cole told the audience before bringing out the former Roc-A-Fella artist, who was received with shouts of excitement from the throng of people. [Billboard]

Last night (3/31), K'Naan & Wale's show at Irving Plaza featured a surprise appearance by Nas and Damian Marley, who performed their album's first single "As We Enter" (Nas and K'naan did "NY State of Mind" too). Videos are below. Nas & Damian Marley's tour this summer includes a show at Williamsburg Waterfront.

At Highline Ballroom last night (3/31), Freddie Gibbs and others from XXL's Freshman Class performed. Cam'ron wasn't quite a special guest - his appearance as the headliner was announced the day before.

One of the more hyped Freshmen, thanks to his imposing style and intelligent rhyming, Indiana's Freddie Gibbs represents a bit of a stylistic change from the other performers. Everything about him--from his physical appearance to his deep, gritty vocals--commands respect. The turning point in his set came when he took his shirt off and upped his intensity (the crowd went crazy).

Donnis was probably the biggest surprise of the night. Besides his smooth, succinct Southern delivery, he brought out two surprise guests of note--Brit soul sensation Estelle and the up-and-coming Ryan Leslie. Estelle, with her scintillating vocals, came out for a quick verse on a new Donnis single, while Leslie played the keys for the track "Gone." [Time Out NY]

Doug E. Fresh also made an appearance before Cam'ron's set. A bunch of videos below...