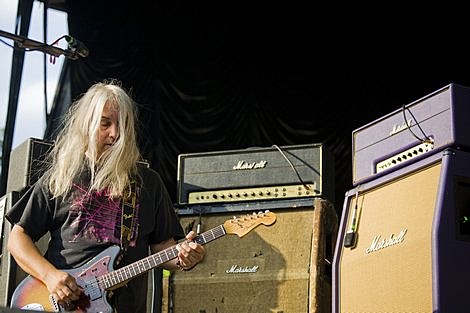 J Mascis has set to release his first solo acoustic album of new material (Martin & Me was a live acoustic LP with no new acoustic material), and first album for Sub Pop on March 15. The album is called Several Shades of Why and is his first solo release since 1996's Martin + Me. The tracklist is below.

As far as dates, all J has coming up at the moment is a performance on Saturday, November 13 at Prema Yoga to benefit Amma's charities. All proceeds from the show will be donated to Embracing The World, the humanitarian efforts of Mata Amritanandamayi Devi (Amma). Mascis will be joined on stage by Devadas and Tony Jarvis. Dinosaur Jr. will be performing Bug in its entirety at ATP in London on July 1.

In other Dinosaur Jr. related news, Lou Barlow has stated the following in a journal entry on his website dated 10/25/10:

I'm going to Japan on Halloween to visit a Mike Watt/Missingmen tour already in progress... play a few shows with them... THEN I'm going to Spain for Thanksgiving-time shows...
It doesn't seem possible for me to be home for more [than] a few weeks at a time... writing new songs doesn't seem possible either... I need home-time deluxe for that... to settle and spread my head
but there's talk of a new Dino record, I'll get something together if that happens... Also Sebadoh will be touring in support of the next 'classic' reissues: Bakesale and Harmacy... myself, Jason and Bob D'Amico... working those songs out should be fun, always is... February for Sebadoh tours, dates forth-coming.

The Mike Watt/Missingmen tour that Barlow mentioned was in support of Watt's new album Hyphenated-Man which is out now in Japan on Parabolica Records. Hyphenated-Man is Watt's third opera, fourth album overall, and is his first since leaving Columbia. An American release is rumored for 2011. The 30-song tracklist, with some live videos from the recent tour, is below.

Watt's tour just ended this past Sunday, but Tera Melos (who opened the October 17-22 dates) have just embarked on a US tour with Maps & Atlases. All dates, album tracklists and stuff below...