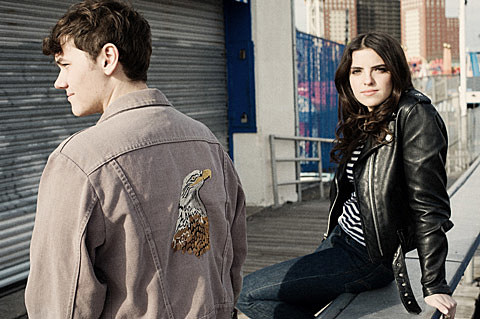 Unlike a lot of bands that call NYC/Brooklyn home, duo Jack and Eliza actually grew up here and have been friends since childhood. Now musical partners, Jack and Eliza make winsome pop, at this point just letting their guitars and voices convey their charms. If you liked the early, stripped-down days of Slow Club with a little Beach Boys/Everly Brothers influence, they're pretty appealing. Jack and Eliza will release their debut EP, No Wonders, via Yebo Music later this summer and you can stream "Hold the Line" (not a Toto cover) below.

We've also got the premiere of a brand new song, "Simple Strait," via a live video shot at Brooklyn's Rare Book Room studios. The song might be on their debut full-length which they're working on. Watch that below.

You can also see Jack and Eliza play live. Catch them Friday (7/11) at Rooftop Films at Metrotech Commons that also features a series of "twisted, romantic short films." That event is free and more details are here. They'll also open for Ski Lodge at Glasslands on August 23 with Rumors on the bill as well. Tickets are on sale.

Jack and Eliza have a few other East Coast dates scheduled and all are listed, along with the song stream and video premiere, below...