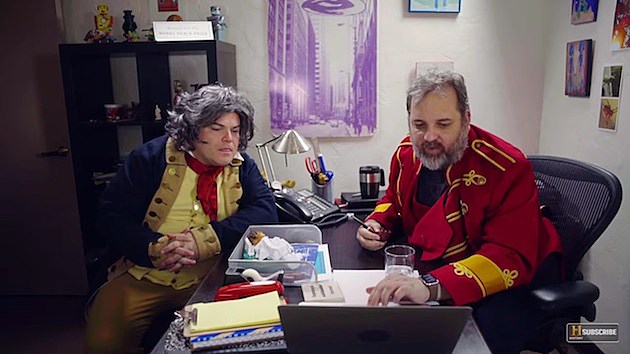 The History Channel has two new short-form comedy series, both of which debuted today and can be seen online. The first is Great Minds with Dan Harmon, which features the Community and Rick and Morty mastermind and Harmontown podcast host interacting with historical figures who are summoned via his sidekick Spencer's time-travel device. The first 10-minute episode features Jack Black as Ludwig Van Beethoven, and its pretty hilarious.

They also have The Crossroads of History, which features Paul Scheer, Elizabeth Shapiro and Josh Fadem who visit famous historical figures at a crucial early point in their lives. The premiere episode, visits Adolf Hitler when he was just a failed painter, and posits that if he hadn't been rejected for art school he might have ended up on a different career path.

Filed Under: Dan Harmon, Elizabeth Shapiro, Jack Black, Josh Fadem, Paul Scheer
Categories: Comedy News, Music News, TV related news
Comments
Leave A Comment
Tour news: Gov’t Mule, TrueAnon, Abigail, How Did This Get Made?, Brooklyn Comes Alive, more
Tenacious D share The Who medley to benefit Everytown for Gun Safety (watch the video)
Tour news: How Did This Get Made?, Citizen, Celebrating David Bowie, The Fixx, more
Official Ronnie James Dio documentary due out this year
Everybody showed up to be in George Harrison’s “My Sweet Lord” video
Tenacious D cover The Beatles on new 7″ to benefit Doctors Without Borders