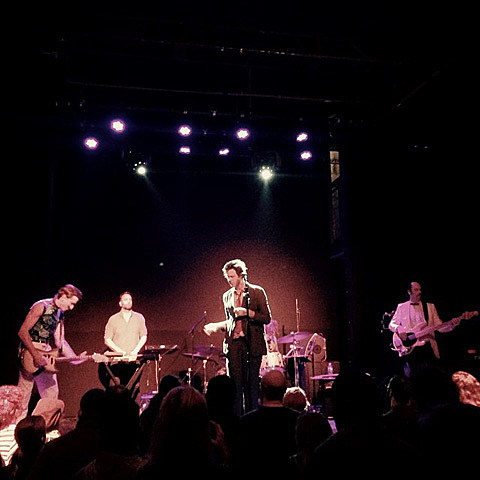 Jack Ladder & the Dreamlanders seem like the kind of band teleported straight from 1985 -- specifically the set of Miami Vice -- straight to Rough Trade's stage last night (3/26). Ladder (real name Tim Rogers) was wearing a linen suit, guitarist Kirin J Callinan was dressed like Kid Creole and bassist Donny Benet looked like he just came from a Maître D job. Musically, it's even more so: liquid, Japan-style bass, glassine synths, stabs of effected guitar and Ladder's enormous baritone croon front and center. They've even got a song called "Neon Blue," which is about as '80s as you can get without namechecking specific references. Ladder's new album, Playmates, is enjoyable but it works better live where eccentricities coalesce with the band's formidable musicianship.

Both those qualities are shared by both Callinan and Benet. Callinan, sporting a pencil mustache and mischievous grin the entire time, slithered around the stage, using his guitar like a gun. Benet, meanwhile, is a seriously good bassist, laying down soft-focus, sexy grooves. Ladder stayed mostly stationary, keeping his cool, letting that voice bring the personality. I was hoping Sharon Van Etten, who sings on two of Playtime's songs, might make a special appearance, but no go. A really fun show all the same. I caught a little bit of Sam Cohen's opening set and he was also pretty good (I missed first band Invisible Familiars).

The night before, Jack Ladder played a (heavily hinted at) surprise set at Baby's All Right, as part of a post-midnight show that had performances from both Kirin and Donny. The latter is even more blatantly '80s (check out the album cover to his new album, Weekend at Donny's) and his and Kirin's set sounds like it was lot of fun (so says a friend of mine, instagram video below).

Jack, Donny, Kirin and the rest of the Dreamlanders, who played a BrooklynVegan day party and other SXSW shows, are headed to the West Coast for an LA show on Monday (3/30). Kirin J Callinan, meanwhile, will be back in NYC next month playing a day show at Baby's All Right on April 11 that's being billed as "Drunk Yoga." He and fellow Aussie Lord Fascinator will be performing "miracles" and entry ($10) comes with a yoga-themed cocktail. Tickets are on sale.