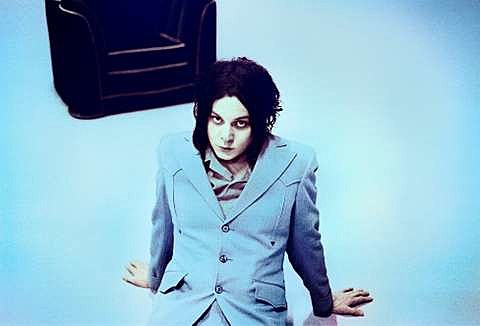 Jack White is in town and tonight (5/21) plays the first of two sold-out Roseland shows with openers the Alabama Shakes. He's also among the growing list of artists playing the ACL Festival this year, which happens October 12 - 14 in Austin, TX. The line-up was revealed via lottery-style scratch-off tickets that were placed in locations around Austin over the weekend and today. Other confirmed performers include Black Keys, Andrew Bird and Delta Spirit. UPDATE: The full ACL lineup has been announced.

When not touring and releasing highly-collectible vinyl via his Third Man record label (like new 7" single "Freedom at 21," due out June 11), Jack has kept himself busy trying to get into the Guiness Book of World Records by using the most metaphors during a single concert. An attempt was made Saturday night (5/19) in Gulf Shores, Alabama:

At Jack White's headlining performance in Gulf Shores, Alabama last night, Guinness officials were anxiously awaiting the beginning of Mr. White's concert (the start of which is apparently very difficult to determine stated Guinness Records reps, music being played notwithstanding). They were there so that they could begin the exhausting process of counting each and every metaphor that occurred onstage as Mr. White attempted to break the record of most metaphors in a single concert.

They definitely had a task in front of them as in the first song alone, three officials that were flown in from the Guinness world headquarters in the anteroom of the Salt and Muskrat pub in Tipperary, counted no less than twelve hundred and three metaphors in three minutes.

Some metaphors were lyrical and others came from moments such as lighting changes and even the calm weather itself during the chorus which momentarily had the feel of Grandma's house in winter. By the seventh song alone the hard work led two of the Guinness officials to wander to the catering table, leaving the counting to their partner who, new to the grueling scientific process involved, accidentally counted 312 similes and three mere comparisons.

Metaphors were occurring in the thousands by this point, some coming from the clothing the musicians had on, others from the colors used on one of the microphone cables which were easter candy blue, making the task of counting extremely trivial or at the very least hard work.

Then tragedy struck and the record attempt had to be forfeited by Jack White when during the second half of the set Mr. White trivialized a metaphor by saying it too quickly. It was something about the moon being a faucet of light but was uttered too fast to be counted.

Guinness representatives will return to tomorrow night's show to begin the exhaustive, scientific, and absolutely authoritative and factual process all over again.

Maybe Jack will break the record tonight at Roseland or one of the other dates on this tour, all of which are listed below.

In related news, Third Man recording artists The Black Belles have announced a new round of North American tour dates that include a June 14 stop at Knitting Factory as part of the Panache Booking Northside Festival showcase that also includes Grass Widow, Turbo Fruits, The Black Belles, Gary War, Gap Dream, and Snack Machine. Tickets for that show are on sale now. All Black Belles tour dates are listed below.