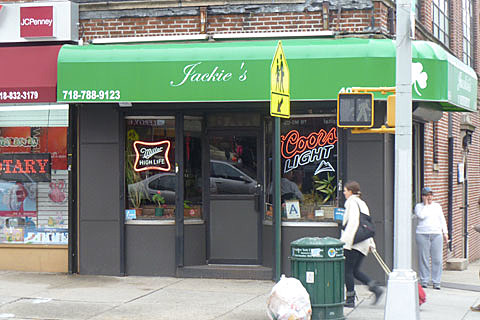 That East Williamsburg petition has started a trend:

WE PETITION THE OBAMA ADMINISTRATION TO:
Allow the bar Jackie's 5th Amendment to secede from the neighborhood of Park Slope in Brooklyn, NY.

Due to the changing nature of the neighborhood and the fact that we are beginning to take offense when potential customers come into the bar, look around them with disdain, and leave, immediately, we the people of Jackie's 5th Amendment at 404 5th Avenue request the permission of the United States Government to peacefully secede from Park Slope and become our own neighborhood, to be tentatively known as "Brooklyn".

Jackie's is one of the few remaining dive bars in the neighborhood, and drinkers who wander in looking for high-priced artisanal cocktails poured by "mixologists" will be disappointed. The bar's specialty is a $10 ice-filled bucket of six "ponies," or 7-ounce domestic beers.

"The neighborhood is changing," [bartender Rebecca McCarthy who started the petition] said. "People walk in and they're like, 'Oh no, not this.' We don't even have vermouth. We couldn't make martinis if we tried."

They should get in touch with the Old Carriage Inn on 7th and make it a movement!

For further reading, check out an interview with Linda the bartender at Here's Park Slope.