A NEW BROOKLYNVEGAN FEATURE
Everyone please help me welcome Jackson Pollis to BrooklynVegan.com. In additon to just generally being a huge music fan, Jackson can be found DJing at clubs and parties all over NYC, most often at Misshapes, and recently on the main stage of the Village Voice Siren Festival in Coney Island. Jackson, a life-long Brooklyn resident, is also in a band and has starred as a Power Ranger on the hilarious television program Wonder Showzen. Jackson is a pretty busy guy, and now he's even busier because he just took on another gig - providing us all with approximately five beats MP3 links a day. We're calling it, creatively enough, "Jackson's MP3 Roundup. This is his first post....

JACKSON BEHIND A FAN ON STAGE AT SIREN 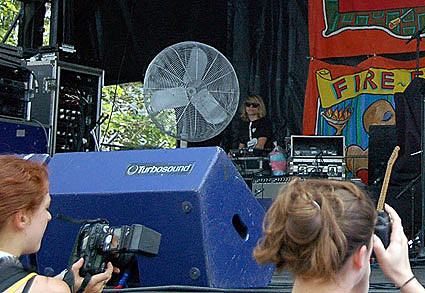 * Bands like Blonde Redhead, Sonic Youth, Mogwai, and Yo La Tengo recorded sessions for the BBC. Get some of them as MP3s. [Kwaya Na Kisser]

* The new Thunderbirds Are Now record (Make History) is due out in the fall off French Kiss. Some new tracks have leaked. One features SNL's Fred Armisen on drums and many others doing backing vocals! [Good Hodgkins]

* Leaked Scissor Sisters, Basement Jaxx, and The Rapture. [Between Thought And Expression]

* Ratatat and Teddybears are just some of Chris' favorites this month. [Gorilla Vs. Bear]