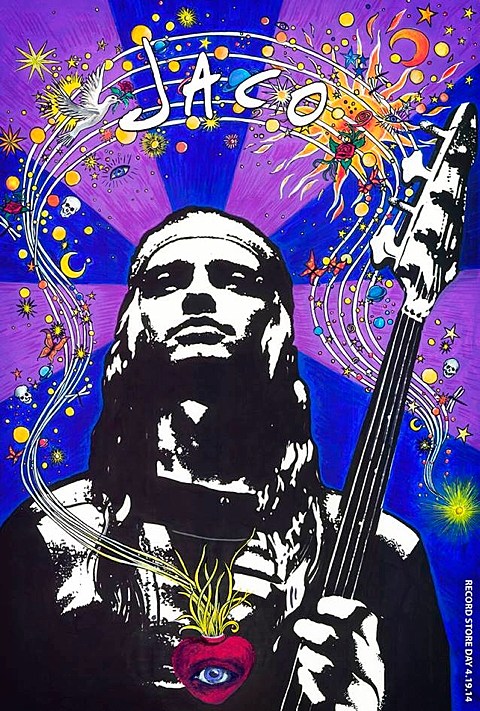 Jaco Pastorius, the late jazz bassist who was a member of Weather Report from 1976 to 1981, a player on multiple Joni Mitchell albums and more, was given the documentary treatment this year with Jaco, which Metallica bassist Robert Trujillo put together. From a NY Times review of the documentary:

When Jaco Pastorius first met Joe Zawinul, the keyboardist and composer behind Weather Report, he had his introduction ready. "My name is John Francis Pastorius III," he said, as Zawinul later remembered. "I'm the greatest bass player in the world."

That line appears more than once in "Jaco," an illuminating, compassionate new documentary, and its hubris comes across as both playful and deeply serious. Pastorius, who died tragically in 1987 at 35, was a sensation in his time. A maestro of the fretless electric bass guitar, he was revered for his warm, singing tone; his distinctly sinewy attack; and his mastery of harmonics, with which he could play chiming chords and a range of expressive effects.

...The film traces the subsequent trajectory Pastorius took from an aesthetically ambitious, large-canvas second album, "Word of Mouth," toward increasingly erratic public behavior. A psychiatrist from Bellevue Hospital, where he was committed in 1986, turns up to reiterate his diagnosis of bipolar disorder. By the end, Pastorius was back in Fort Lauderdale, living in a park. He died of a brain hemorrhage after being assaulted by a manager of a nightclub.

"Jaco," which portrays its subject in better times as a devoted father, is sensitive on the subject of his mental illness, and far less provocative than it could be about his death.

Joni is interviewed in the film, as is Flea, Sting, Wayne Shorter, Herbie Hancock and Geddy Lee, and the extras include an interview with Carlos Santana. It's out now and you can check out the trailer, below.

The soundtrack for the documentary also features Rodriga y Gabriela covering "Continuum." You can listen to that below too.