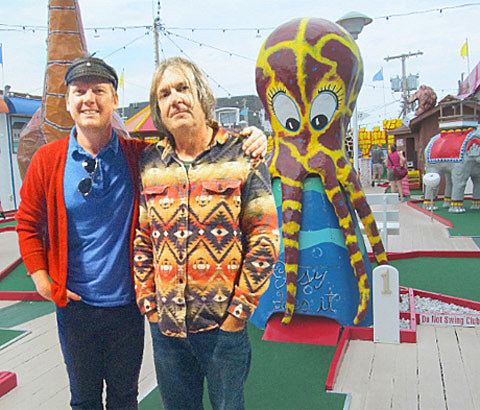 Prolific cult artist Jad Fair released a collaborative album with Danielson, titled Solid Gold Heart, and you can stream the whole thing below. You can hear it live too, as Jad and Danielson will be touring together next month, including a show in NYC at Glasslands on September 12. Also playing that show is Don Fleming (who, among other things, spent time in Fair's old band Half Japanese), plus Jeffrey Lewis & Peter Stampfel. (Peter also plays NYC tonight [8/28].) Tickets are on sale now. Making this tour, and the Glasslands show in particular, all the more a family affair, longtime Jad Fair collaborator Kramer (whose label Shimmydisc released a lot of Fair's records) will be part of the ensemble.

This is one of four collaborative albums Fair is releasing this year as part of Joyful Noise Recordings' "Artist in Residence" series. The other three are with R. Stevie Moore, Teenage Fanclub's Norman Blake, and Strobe Talbot.

Half Japanese are also a week away from releasing their first album in 13 years, Overjoyed (due 9/2 via Joyful Noise), and you can stream that in full via Pitchfork.

Dates are listed, along with the Solid Gold Heart album stream, below...