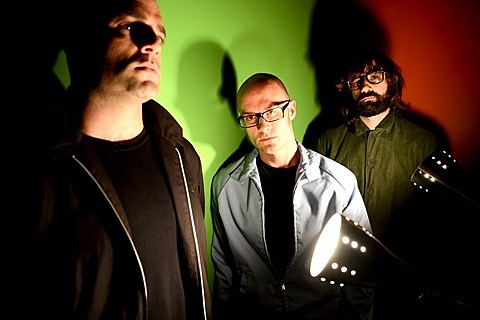 If all the old emo bands can reunite, the labels can too, right? Jade Tree Records, home of releases by Jets to Brazil, Owls, New End Original, The Promise Ring and many others, has been mostly quiet (but not entirely inactive -- their last release was a Slutever 7" in 2013) for the past few years, but they are now set to be "putting out records consistently again."

This news comes along with the announcement that they've signed Dark Blue (the new-ish Philly trio with members of Clockcleaner, Paint It Black, Ceremony and Purling Hiss) whose last release was a 7" on Katorga Works. Dark Blue's first release on Jade Tree will be the Just Another Night With The Boys 7" that comes out on July 15. The new single is backed by a cover of John Cale's "Hungry For Love." Both have singer John Sharkey III crooning in his goth baritone that's in a lineage of everyone from Joy Division to Interpol to Merchandise. Stream both tracks from the 7" below.

Dark Blue also have a few dates coming up, including a previously discussed stop in NYC opening for Lower when their tour hits Acheron on Friday (5/30). That show also includes La Cruor and tickets are still available. Lower also play Nothing Changes at Home Sweet Home on Wednesday (5/28) with Survival.

All Dark Blue dates are listed, with the song streams, below...