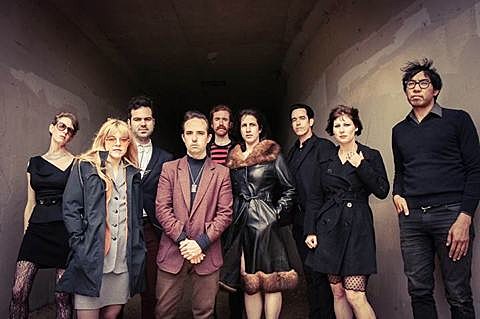 One of the biggest rock bands in Los Angeles (literally, there's nine of them), Jail Weddings make grandiose psych-rock in the tradition of Lee Hazlewood or Scott Walker. The band's new album, Meltdown - A Declaration of Unpopular Emotion, is out now on Neurotic Yell/Burger and you can stream the whole thing below. One of the album's tracks, "It's Not Fair," just got the music video treatment courtesy of director Kyle Safieh. Bathed in the orange and reds of fire, the clip is "a psychedelic/post-traumatic mission through the tropics of obsession, during the ceaseless war between twin countries Amoral and Amore." I think we can all relate to that. Watch it below.

Jail Weddings have a few West Coast shows coming up in December and those dates are listed, along with the video, below...

Jail Weddings - It's Not Fair