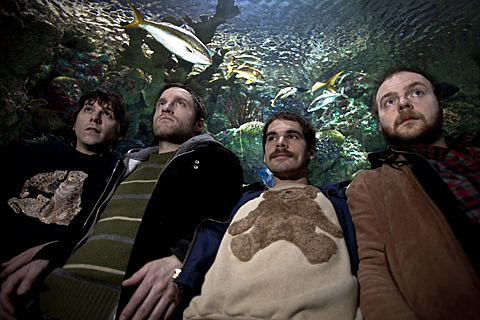 Milwaukee's Jaill are touring and will be in town for the CMJ Music Marathon, playing The Studio at Webster Hall on Thursday, October 21 with Keepaway, French Horn Rebellion, Dale Earnhardt Jr Jr and Viernes. They'll also play Popgun's unofficial party at Glasslands on Saturday, October 23 that also features Baths, Dominant Legs, Teen Daze, Porcelain Raft, Mon Khmer. The Glasslands show is only $5 if you RSVP.

Sub Pop doesn't have a CMJ showcase this year or else they'd probably be playing that too. Sub Pop sister label Hardly Art has a show though (but Jaill aren't playing it).

Jaill's second album, That's How We Burn, came out on Sub Pop over the summer and didn't get a whole lot of attention, but is a nice little platter of melodic indie rock. Their sound is a little surfy, like if The Hoodoo Gurus had come into existence in the '90s instead of the '80s. You can download two tracks from That's How We Burn at the top of this post. They were good when I saw them at the Sub Pop SXSW showcase this year.

Somewhat interesting trivia: This is the second band signed to Sub Pop that is pronounced "jail." The first was Jale, who were part of the mid-'90s Halifax, NS scene that also spawned Sloan and Thrush Hermit.

The video for "The Stroller" and all Jaill tour dates are below.