No laser (photo via Kelly Rose) 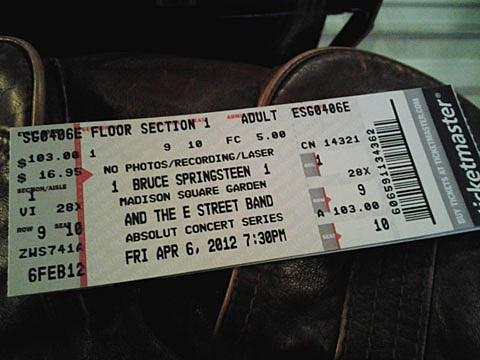 "...This was Passover on E Street, where fans clutched a customized Haggadah featuring the singer's face emblazoned onto the cover; where an original song, "Matzah Ball," sung to the tune of Mr. Springsteen's "Wrecking Ball," made its debut; and where, in a city with many superfans of the band and many more Jews, a group of devotees was able to have its holiday Seder, and its Springsteen, too.

The idea came from Warren Rosen, 46, the owner of an insurance company who has attended about 200 Springsteen shows, starting in 1980 at the Nassau Coliseum.

He had no intention of missing Mr. Springsteen's opener at the Garden because there wasn't enough time to travel from a Seder at home to the concert.

So Mr. Rosen, a native of Massapequa Park, on Long Island, booked a private room at the Ainsworth Prime, a restaurant on an upper level, and invited friends, of all faiths, on Facebook.

He also asked members of the Springsteen band to join in before the show, and the saxophonist, Jake Clemons, the nephew of the late Clarence Clemons and a recent E Street addition, dropped in and read from the Haggadah..."

The setlist from last night's Bruce Springsteen & the E-Street Band show at Madison Square Garden, below...

--
Bruce Springsteen @ MSG - April 6, 2012 - setlist
Badlands
We Take Care of Our Own
Wrecking Ball
Out in the Street
Death to My Hometown
My City of Ruins
Murder Incorporated
Johnny 99
Jack of All Trades
Shackled and Drawn
Lion's Den
Easy Money
Waitin' on a Sunny Day
The Promised Land
Apollo Medley
American Skin (41 Shots)
Lonesome Day
The Rising
We Are Alive
Thunder Road
Rocky Ground
Kitty's Back
Born to Run
Dancing in the Dark
Tenth Avenue Freeze-Out