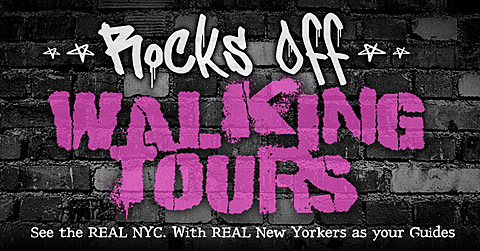 "Rock N Roll has lived, breathed, evolved and injected itself into NewYork City - transforming itself, the city, the people and the very culture of America and the world along the way. Please allow us to show you the when, the how, the why, and the who.

A walk through Manhattan's East Village is a walk through Rock N Roll history. Boston can have their Freedom Trail and Philly can keep their Liberty Bell, nowhere has more history, culture and tradition than New York City and nowhere rocks nearly as hard. Since famed radio DJ Alan Freed coined the term Rock N Roll, New York has been its ground zero.

Sure, you could go to Cleveland and walk through a museum, or surf Wikipedia until you're blind....OR you could immerse yourself in the very streets and sights where ordinary men and women became immortal rock gods and the proverbial "shit went down." We're talking about a walking tour of the great Rock N Roll haunts of NYC, a one-of-a-kind pilgrimage through the East Village and Lower East Side. From the late 19th century Vaudeville and Yiddish Theaters of the Bowery to the Homesteading by the Beatniks in the 50s, the hippies and radicals of the 60s and the classic rock and punk rockers of the 70s, this is where rock transformed from music to religion.

The Rocks Off Rock N Roll Walking Tour will show you ALL OF IT and then some. See where Leadbelly spent the last few years of his life, Charlie Parker's historic home, the Fillmore East, CBGB, Max's Kansas City, The Electric Circus, The Palladium, The Ritz / Webster Hall, Irving Plaza, Tompkins Square Park, Madonna's first NYC apartment, and tons more! Be prepared to walk the streets that LEGENDS have walked, piss in urinals that Lou Reed pissed in, drink egg creams that the NY Dolls drank, shit where GG Allin shit (everywhere). See where everyone who was anyone partied, played, created, and inspired the whole wide world."

The walking tours are available in two flavors: The History of Art, Crime, Drugs, and Punk Rock on the Lower East Side (with host Cro-Mags vocalist John Joseph) and The Past, Present, and Future of Rock N Roll In New York City (with host and Rocks Off honcho Jake Szufnarowski).Tickets are on sale for the tours which are running now (the next one is this this Friday) through the end of the year (so far).