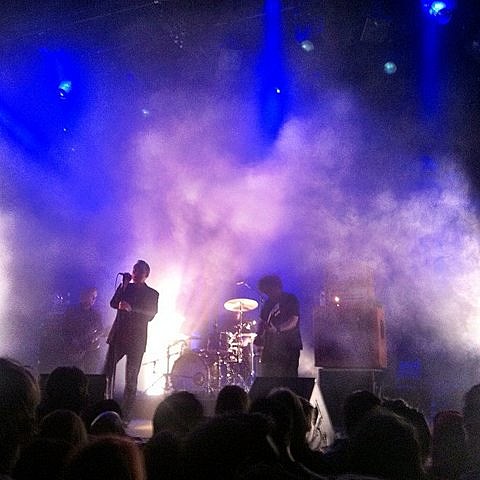 As we knew The Jesus & Mary Chain were heading to the East Coast (Osheaga in Montreal in August and Hopscotch in North Carolina in September), and various dates around Hopscotch have leaked, but we've been wondering when and if an NYC show might appear. Turns out there are two: the JAMC will play Irving Plaza on September 13 and 14. Tickets for the 9/13 and 9/14 shows go on sale Friday, June 22 at 10AM with a presale starting June 21 at 10AM. All currently known JAMC dates are listed below (more to be announced).

The Reid brothers played California last week, with a Stop at the Fillmore in San Francisco on 6/14. Here a bit of SF Weekly's (mostly) positive review:

Last night at the Fillmore, The Jesus and Mary Chain botched the beginning of three different songs, accidentally knocked over multiple microphone stands, and dropped many drum sticks. The Reid brothers, Jim and William, who comprise the group's core, bickered; additional guitarist John Moore was told to "shut up"; and the microphones fed back intermittently. Yet it was incredible how well all of this negativity suited the band.

The JAMC's aesthetic is marked by a duality that permeates every facet of its existence. Each hook is balanced with noise. Its catchiest tunes are usually the most depressing lyrically. During the band's set last night, this duality manifested itself in more than just the songs. Adorned in black blazers underneath minimal lighting, and enshrouded in gratuitous clouds of smoke, the group maintained a stoic attitude throughout the evening that was only broken by fits of frustration...

... The most upbeat tunes were followed by the most mournful, and activity on the sold-out dance floor degenerated into a bog of underwhelmed fun-seekers. Seemingly in a reaction to the morose pace of "Sidewalking," one attendee clambered on stage and began crawling. For the duration of the song's final verse, chorus, and outro, the woman slowly crawled her way from one side of the stage to the other, uninhibited, and looked decidedly cool doing it. A frenzied stage diver would not have had nearly the same effect. Anticipating the inevitable plunge and capture, she donned shades and plodded along with the perverse determination of a cult ritual. Like the tragic heroine in a JAMC lyric, she made a spectacle before self-destruction. [SF Weekly]

It's not a good JAMC show unless the band are on the brink of a fistfight. A few videos from the Fillmore show and the setlist are with the dates below.

JAMC - The Fillmore, SF 6/14/2012 Setlist
Snakedriver
Head On
Far Gone and Out
Between Planets
Blues From a Gun
Teenage Lust
Sidewalking
Cracking Up
All Things Must Pass
Some Candy Talking
Happy When It Rains
Halfway to Crazy
Just Like Honey
Reverence
Encore:
The Hardest Walk
Taste Of Cindy
Never Understand