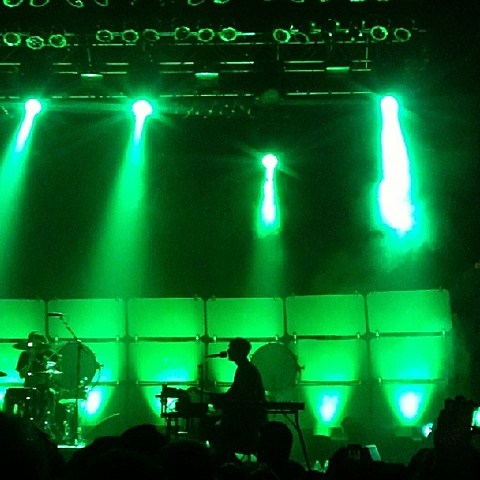 James Blake brought his current tour to NYC for two nights at Terminal 5 this week (11/6 & 11/7), his second two-night run at the venue this year. I hadn't seen James since catching him at MHOW in 2011, so I was a little nervous to see him in such a drastically bigger venue, but there actually turned out to be some plus sides. James has a much more elaborate light show now than he had in the early days and it worked really well on T5's stage. His sound was also as proportionately big here as it was at MHOW, which means it was huge, and still managed to shake the 3,000-capacity venue on the bass drops of "Limit To Your Love." Of course there were some down sides too, like that he had a lot more trouble keeping the crowd out of the pauses in his vocal loops, but you can't fault the guy for gaining more fans.

The set was about half songs from the new album, and the other half was the "big" songs from his debut, like "I Never Learnt to Share," "The Wilhelm Scream" and "Lindisfarne," plus tracks from various EPs, including "CMYK," "Klavierwerke," and his cover of Joni Mitchell's "A Case of You." He's playing bigger rooms regularly now, and intentionally or not, much of the new album really caters to that. Futuristic bass-heavy jams like "Digital Lion" and "Voyeur" overtook the venue, as did "Retrograde," his most immediate pop song to date. Yet in their own ways, the intimate moments were just as captivating, and it's still impressive that the same guy who's reinvigorating dance music on one song, is winning over 3,000 people with a piano-led Joni Mitchell cover on the next.

Check out some videos from T5, and the setlist from DC (which was very similar, if not the same as NYC), below...

James Blake at DC's 9:30 Club - 11/2/13 Setlist: (via)
I Never Learnt to Share
Life Round Here
To the Last
Air & Lack Thereof
CMYK
Overgrown
I Am Sold
Digital Lion
Our Love Comes Back
A Case of You (Joni Mitchell cover)
Lindisfarne I
Lindisfarne II
Limit to Your Love (Feist cover)
Klavierwerke
Voyeur
Retrograde
The Wilhelm Scream