Tonight's Secret Santo will feature not one, but two legendary figures in the history of subcultural music - James Chance and the Homosexuals - sharing a bill for the first time ever! And, as every week, this new rock'n'roll dance party also features DJ Jonathan Toubin, Go Go Dancer Anna Copacabanna and a live projectionist, this week, the inimitable Spencer Bewley. Tell yr friends - and RSVP anytime before 6pm Monday at: mailinglist@newyorknighttrain.com [New York Night Train] 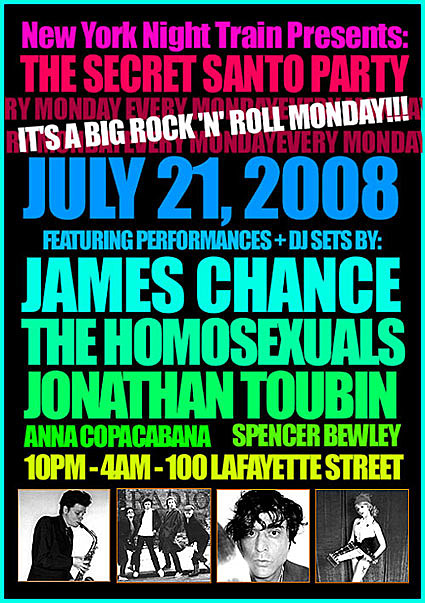 Mr. James Chance! You heard me - THEE James Chance, the central figure in New York No Wave, also one of the most important forces in the establishment of the dance punk genre (he pre-dated Gang of Four and made them look like Air Supply), the leader of both the immortal Contortions and the timelessly dynamic James White and the Blacks, performs and spins records tonight. This massive skyscraper on the horizon of subcultural music history's sold-out European Contortions reunion tour proved that this sax maniac is still designed to kill and knows how to dish it out until all you bedroom athletes flip your faces. But he's not just gonna blow one of the most distinctive saxophones ever and show you kiddies how to dance, but he'll jump behind the DJ booth afterwards and throw down a fiery hot collection of get-down tunes from the 1950s to the present - super rare deep cut soul, funk, r&b, and other kinetic rough delights with Monday Santos' house DJ Mr. Jonathan Toubin. Each time the terrible two get behind the booth they refuse to abandon the decks until both the wounded and the dead are carried off the battlefield - leaving only a pile of damp smoldering ashes on the dancefloor.

Though James has been all over the public consciousness yet again with the publication of Thurston Moore and Byron Coley's highly acclaimed NO WAVE history a few weeks ago (with James both on the cover and the hero of the narrative), this is his first public appearance since the hubub bubbled up and over yet again.