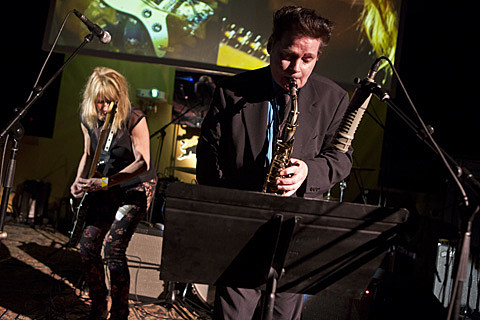 No wave legend James Chance continues to play around his hometown of NYC a good amount, and he'll be returning to Manhattan venue Le Poisson Rouge on July 6 for a particularly interesting show. It's billed as James Chance & the Contortions, and for this show the Contortions lineup will include Richard Hell & the Voidoids guitarist Ivan Julian. The rest of the lineup is pretty great too, including Sal P of Liquid Liquid, lo-fi godfather R. Stevie Moore, and Endless Boogie. Tickets for that show are on sale now.

In the above picture from the Night of Improvised Round Robin Duets, James is pictured with Kim Gordon, who plays NYC tonight (6/13) at Saint Vitus as one half of her Body/Head duo with Bill Nace. It's part of the Pitchfork Northside Showcase which also includes Kathleen Hanna's new band The Julie Ruin, Majical Cloudz, and Foreplay (sold out, but if you got a badge, get there early and try to get in).

Check out a recent live video below...