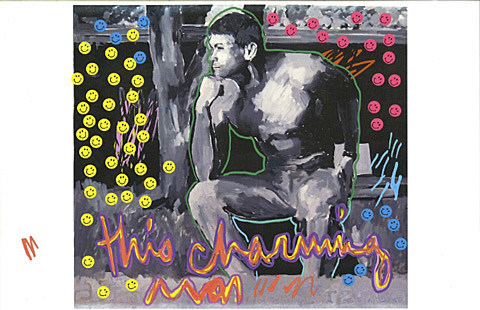 As everyone knows, James Franco can do everything. And he often does. That includes being in a band, Daddy, which is him and pal Tim O'Keefe. Daddy's new album, due out in 2015, is titled Let Me Get What I Want and if that title is ringing bells...it, like the album, is an homage to The Smiths.

The Pineapple Express actor recently published a book of poetry called Directing Herbert White: Poems and two sections in it are called "Poems Inspired by Smiths' Songs," which are reactions to Smiths songs, each poem baring the title of the Morrissey/Marr song that inspired it. Which then became the new Daddy album. These aren't covers. While a lyric from Daddy's "This Charming Man" may start "I would go out tonight," it finishes with "but I think I'll pass" instead of "but I haven't got a stitch to wear." Giving this project some legitimacy, they got Smiths member Andy Rourke to play bass on the whole album.

You can check out first single "This Charming Man" via its video which is part of an accompanying film that features the entire album as a seamless mix and narrative. The footage was shot by students of James' mother at the high school that James attended in Palo Alto. Students were given the poems and asked to shoot based on them. Watch the video below.

Speaking of Rourke, the bassist made an appearance at the Peter Hook & the Light show at NYC's Irving Plaza on Friday (11/7), coming out to play on New Order song "True Faith." You may remember that Rourke and Hook, along with Mani from Stone Roses, were part of Freebass that existed in the late '00s. Rourke also played with his former Smiths' bandmate Johnny Marr last year when he toured through NYC, maybe he'll do it again this week?

Video for Daddy's "This Charming Man" below...