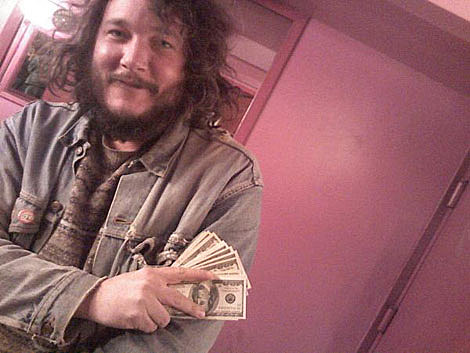 I have more great memories of Jack than of almost any other musician I know. That isn't because I spent more time with Jack - we saw each other somewhat regularly over the years on tour and at the odd festival - but because every encounter with him was memorable in some way. I'd say that Jack and I shared many things, but I know everyone who's ever met Jack has a similar story. His warmth, goodwill, stubbornness, and unflappable candor were all just as inspiring to me as his brilliant guitar playing.

Another thing I will always remember about Jack is his devotion to his wife Laurie. Any time he spoke of her, his worship and adoration was palpable. But rather than his gruff exterior melting into something cutesy or soft, he seemed to grow even more serious when discussing his loyalty to Laurie, as if to impart that anyone who might ever dare say a word against this woman would rue the fucking day. It's something that always stuck with me about Jack.

My last communication with Jack was an audacious email proposal - I was interested in adding some vocals to some of his unreleased tunes. Despite even close friends discouraging me from such blasphemy - "we love you but you'll ruin it, James" - Jack was psyched about the idea and gave his blessing, saying that he's always written with vocals in mind. Can't help wondering if we mighta had another Voice Of The Eagle on our hands. Ha!

Dr Ragtime never met Blind Joe Death but I bet the two of 'em are having a good chuckle at all of us Sentimental Sallys right about now.

I loved Jack and will miss him very much. R.I.P, brotherman. It won't be the same without you.

I found the picture and James (aka Wooden Wand)'s tribute at a new website set up in Jack's honor.