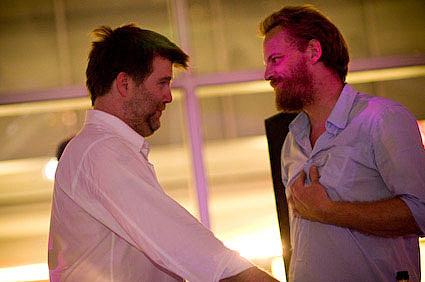 LCD Soundsystem's James Murphy has revealed that he is involved in a new band who are set to release material on his label, DFA.

"There's this rock band arguing about what name they are," Murphy told NME.COM. "They're from Minneapolis.

"We've gone back and forth for months, there's no way to say [what the band name is]. Pat and I are the drummer and the bass player [respectively]."

Murphy said he expected to release material by the new collective next year.

According to his spokesperson Murphy is not officially a core member of the band, although he produces and contributes bass.

Pat Maloney?? (like I should talk). James and Pat are also collectively known as Special Disco Version, and............

we're back and better than ever! pat und james have returned from brazil, japan, korea, the UK, ireland and the ukraine to get stupid with gentleman dj matt cash. $4 prb cans? $5 cover? it's like a hardcore show, if hardcore shows had really gay disco. oh--and NOT the straight edge kind of hardcore show, either. the fun kind. GET NAKED! 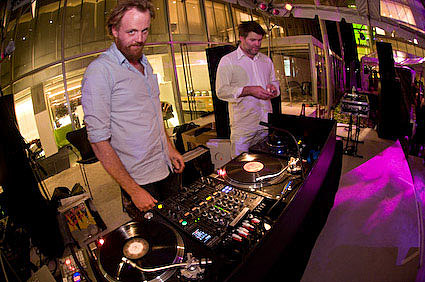 Things will come full circle on this Tuesday night in December, when Sam and James reunite in a context that will be part conversation, part consternation, and part Ultimate Fighting.

Sam Lipsyte, author of "Home Land" and "The Subject Steve," and a recently Guggenheimed novelist and Columbia professor, began his descent as the much feared Sam Shit, front-man of the internationally ignored Dung Beetle Rock Band. And Dung Beetle's engineer was one young James Murphy.

James Murphy, the man who resurrected disco via punk, is best known for his band LCD Soundsystem and his record label DFA. James Murphy, upon being crowned artist of the year in the Village Voice 2007 Pazz & Jop poll, stated: "I'm 37 years old. I'm 220 pounds. I'm a producer. I've got about as much likelihood of being a fucking frontman as Christopher Cross..."

That one is happening at Joe's Pub.

Special Disco Version also just DJ'd at the B-52's show that took place at Hammerstein Ballroom. Coverage of that is coming any second.