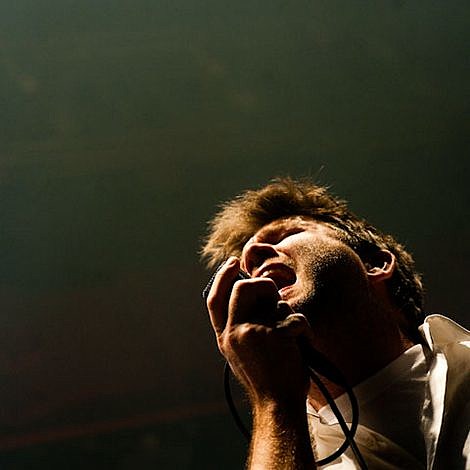 good people of earth:
lcd soundsystem are playing madison square garden on april 2nd, and it will be our last show ever. we are retiring from the game. gettin' out. movin' on. but for just one more night, we will be playing with friends and family for nearly 3 hours-playing stuff we've never played before and going out with a bang. and we'd like you to be there.

if you would, we'd love it if people all came in white. or black. or black and white. and come ready to have fun, please. and come early, as the festivities will be opened by our favorites, liquid liquid. yes: liquid liquid.

if it's a funeral, let's have the best funeral ever!!!

They hadn't planned on announcing all that until Monday, but then they found out that the show was already announced thanks to posters hanging all over NYC. In reaction to that, James posted a message earlier in the day on the DFA message board:

---
MESSAGE FROM JAMES MURPHY TO DFA MESSAGE BOARD:

just because of a fuck up with some posters, you'll probably find out while i sleep down in australia (supposed to be announced on monday) that we'll be playing madison square garden on april 2nd, and that it'll be our last show. we'll be retiring as this live band after that.

we're playing with liquid liquid, and we're playing, i think, something like 3 hours of music. stuff we've never played along with the music we've been playing for years now.... i'm really excited actually. we've been getting ourselves ready, and hope to play the best show of our lives.

i'm just letting you guys know so you can hear it from us, rather than some miscellaneous place. please don't tell anyone until monday, though, if you don't mind. come monday, tell whoever you want!

we're working on putting aside some tickets for forum members etc. to get before the general sale, by the way--and trying to avoid the retarded ticketmaster charge that goes on the MSG tickets.

I guess he later changed his mind about the "please don't tell anyone until monday" part. Pictures of the posters in question, and the list of dates that currently has the band down in Australia, HERE.