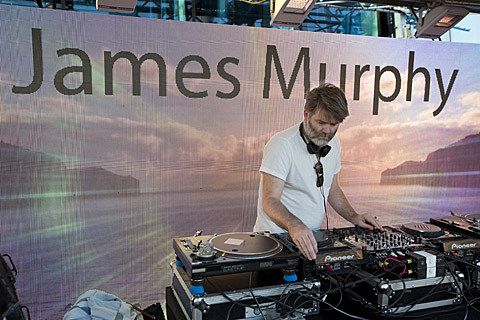 LCD Soundsystem/DFA Records man James Murphy is suing Tim Goldsworthy, who he formed DFA with in 2001, but who moved out of New York to the UK three years ago...

In a lawsuit, DFA accuses Goldsworthy of failing to perform services he was paid for, owing outstanding loans, improperly using the company credit card and making unauthorized withdrawals from its bank accounts.

The lawsuit, filed Friday in Manhattan Civil Supreme Court, says that "attempts to amicably resolve this matter were rebuffed" by Goldsworthy. It also accuses the producer of "breach of contract" and "unjust enrichment."

Goldsworthy owes a total of $93,899, according to DFA. The label, which has a studio in Greenwich Village and boasts such acts as Holy Ghost!, also seeks punitive damages and legal fees. [DNA Info]

In related news, tickets for James Murphy's DFA Records 12th anniversary party with DJ sets from him, The Rapture, YACHT, Black DIce, Juan Maclean, and so many more, are on sale now. The event is one of many upcoming Red Bull Music Academy events happening in NYC. Other RBMA events are on sale too, including Brian Eno's "illustrated talk", Four Tet at Webster Hall, A-Trak, Just Blaze, and others at Roseland, Giorgio Moroder, and many more.