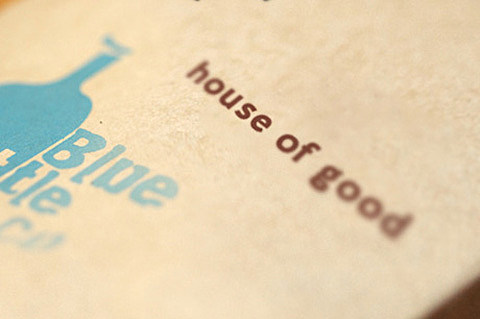 Producer/DJ/director/man about town James Murphy may never see his plans to turn NYC subway cacophony into pleasant soothing xylophone sounds come to fruition, another long-brewing idea has now come to a boil.  Esquire reports that the espresso blend Murphy's been working on for a while has now hit the market. It's called "House of Good" and was developed as a collaboration between Murphy and Blue Bottle. It's descibed thusly:

Its flavor profile - dried cherry, cocoa, meyer lemon - is a harmony between the voluptuous and the austere: It's akin to the second movement of Carl Nielsen's Symphony No. 3 - or, perhaps, to that buzzing, syncopated synth line from "Dance Yrself Clean."

You can buy it online right now at $26 a pound and is available at the Boerum Hill location of Blue Bottle coffee (which opened today), for the next month in its espresso drinks.

For those keeping track, Murphy's been working on his coffee blend for about two years. You also may remember that "House of Good" is the name of the not-yet-realized store that the ex-LCD Soundsystem frontman plans to open in Brooklyn, which he told the NY Times will sell "cheap Chinese sneakers, whimsical socks, candy from Denmark" and luggage designed by Murphy, among other things.

"House of Good" isn't the only indie-rock edible out there -- Bonny Prince Billy made a coffee, too, and how could anyone forget Stephen Malkmus & the Jicks' "Cinnamon and Lesbians" ice cream flavor at Momofuku Milk Bar?