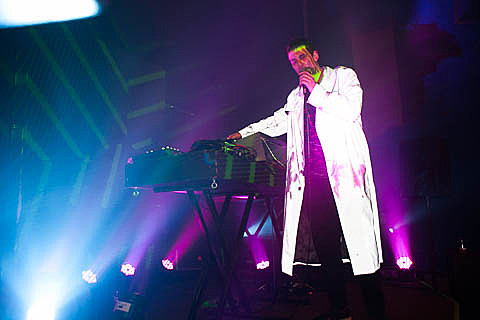 In addition to the previously discussed FREE Jamie Lidell show scheduled to take over Prospect Park on August 2 with co-headliner Dan Deacon, the dance-y Englishman has scheduled another, far more intimate show the day prior at Le Poisson Rouge on August 1. Tickets are on sale. The show is one of a few select dates for Lidell, all of which are listed below.

Lidell was recently the subject of a short documentary, Jamie Lidell - What We See Is What You Get and you can watch it below too.

Meanwhile, Dan Deacon was recently announced as part of FYF in Los Angeles. Also, his Record Store Day 2013 single, "Konono Ripoff Nº1," recently got the video treatment, and the clip involves an interactive element courtesy Dan's smartphone app. Check that out, along with his and Jamie's tour schedule, below.