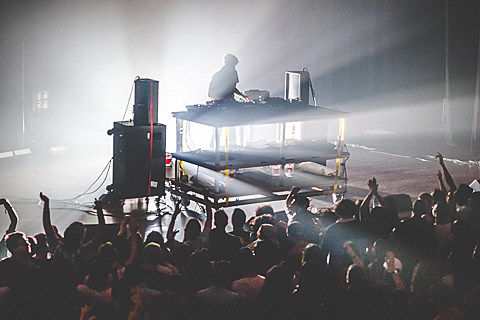 The Armory's 2015 season encompasses site-specific installations, commissions, and cross-disciplinary collaborations across a range of art forms--including Philippe Parreno's largest exhibition in the U.S. to-date, a multi-sensory journey within the monumental interior of the Armory's drill hall; Tree of Codes, a new contemporary ballet with direction and choreography by Wayne McGregor, visual concept by artist Olafur Eliasson, and music by Jamie xx; a commission of performance art by Laurie Anderson; and an immersive interpretation of J. S. Bach's Goldberg Variations by pianist Igor Levit and performance artist Marina Abramović.

The Park Avenue Armory 2015 season runs from this month through December with various events. As quoted in the press release above, one of those especially interesting events is Tree of Codes, a new ballet with music by The xx's Jamie xx.The ballet was inspired by the book of the same name by Jonathan Safran Foer, and Jamie worked alongside choreographer Wayne McGregor and visual artist Olafur Eliasson. Having had his work displayed in conjunction with a Sigur Ros performance in the past, Olafur is no stranger to working with indie musicians. That ballet runs from September 14-21.

The following month, it's the legendary Laure Anderson premiering her new multimedia artwork, Language of the Future: The Line, from October 2-4. The work will be "harnessing a cacophony of events from anthropology and history to form a series of songs in visual form. Commissioned by the Armory, Anderson creates a site-specific environment in which audiences confront these diametrically opposing ideas, situations, and images. The result is a processional of consciousness where doubt, perception, and illusion are defined and redefined in equal measure."

You purchase a 2015 season subscription here. Full schedule with more info, below...

FLEXN
March 25--April 4
Featuring a crew of 21 dancers from the neighborhoods in Brooklyn where the movement first took shape, and staged by Reggie (Regg Roc) Gray and Peter Sellars, this dynamic production serves as a social commentary utilizing resistance and empowerment to take the art form further and in turn, find a profound sense of humanity.

PHILIPPE PARRENO
June 10--August 2
n his largest installation in the U.S. to date, Philippe Parreno reshapes the very notion of what it means to experience art by exploring an exhibition as a singular, coherent object rather than as a collection of individual works. This dramatic composition combines remastered existing works and new projects to guide and manipulate the viewer's experience and perception by utilizing sound, film, light, and memory.

TREE OF CODES
September 14--21
Award-winning choreographer Wayne McGregor, artist Olafur Eliasson, and Mercury Prize-winning producer/composer Jamie xx create a new ballet triggered by the book Tree of Codes by Jonathan Safran Foer, an artwork in the form of a book which was in turn inspired by Street of Crocodiles by Bruno Schulz. This new, evening-length work features a company of soloists and dancers from the Paris Opera Ballet alongside Wayne McGregor | Random Dance.

LANGUAGE OF THE FUTURE: THE LINE
October 2--4
Iconic storyteller Laurie Anderson examines the contrast between an event and the memory of that event in her latest multimedia artwork, harnessing events from anthropology and history to form a series of songs in visual form. Featuring a series of actors, musicians, and even miniature horses, Anderson creates a site-specific environment in which audiences confront their perceptions of these opposing ideas, situations, and images in a processional of consciousness.

GOLDBERG
December 7--19
Igor Levit, who made his impressive North American recital debut at the Armory in 2014, interprets Bach's towering keyboard masterpiece Goldberg Variations in an installation created by seminal artist Marina Abramović. Having redefined what performance art is for nearly 40 years, she now reimagines the concert-going experience by creating a concentrated durational work that reflects upon music, time, space, emptiness, and luminosity, with the audience becoming a part of the work to connect with themselves and with the present-- the elusive moment of the here and now.

RECITAL SERIES
March 10--November 10
Since its reopening, the Belle Epoque splendor of the Board of Officers Room has shown through in magical recitals that invoke the salon culture of the Gilded Age. Featuring recitals by Alina Ibragimova, Ian Bostridge & Wenwen Du, David Fray, Rushes Ensemble, Christian Gerhaher & Gerold Huber, as well as a Lindemann Young Artist Concert and The Night Dances with Charlotte Rampling & Sonia Wieder-Atherton.