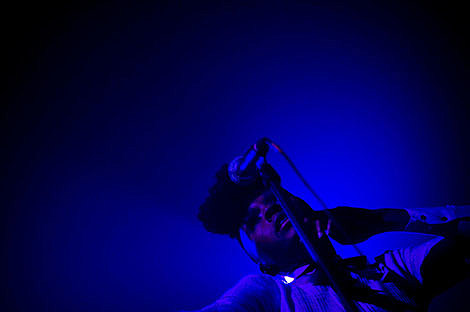 Janelle Monae has an upswept hairdo that's part R&B pompadour, part Mohawk, and perfectly strategic. For most of an afternoon [SXSW] party set at Peckerheads, a club with nonexistent sightlines, the crest was the only part of the petite singer visible from 10 yards away -- a shame, since she has some sharp dance moves.

But her voice was vivid as she belted socially conscious neo-soul songs, rapped about feeling like a stepchild and an outcast (she has worked with OutKast) and crooned a melismatic version of the ballad "Smile." And for her finale, after singing about apathy that turns people into the "walking dead," she gave everyone a chance to see her: fearlessly jumping into the crowd and surfing it from front to back to front. [NY Times]

Janelle Monae will open all three of Of Montreal's sold-out shows at MHOW (April 15th-17th). After that she shares two more bills with the band - one in CT, and Bonnaroo in June.

Of Montreal has other shows scheduled too. That includes a stop at Sasquatch. All dates are listed below. The track above is from the band's Jon Brion Remix EP, which came out on Polyvinyl in January.

This June, Janelle Monae will kick it up a notch (exposure-wise) when she opens several dates for the newly reformed No Doubt, who have a nearly-three-month tour planned. The band brings Monae along when it plays NYC-area shows at PNC Bank Arts Center on June 26th and the Nikon at Jones Beach Theater on June 27th (all dates below). No Doubt is also at work on a new, sixth album - their first in nine years, due in 2010 (in case you were wondering).

Other bands opening on the No Doubt tour include Paramore, The Sounds, and Bedouin Soundclash.

Of Montreal videos, and all tour dates, below...

of Montreal - An Eluardian Instance