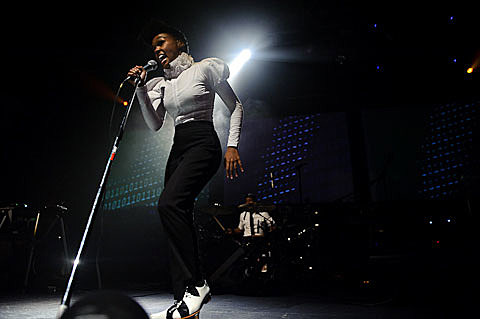 With the dates announced for Prince's Welcome 2 America Tour, one of the touring acts, Janelle Monáe, spoke to MTV News about hitting the road with the legendary musician. To sum it up, she's pretty stoked to tour with someone as iconic as Prince.

"Well, I'm excited. We're great friends," Monáe told MTV News on Monday at the Glamour Women of the Year event in New York City. "I'm honored that he had chosen me to be a part of the tour."

Monáe may be somewhat of a rookie compared to Prince, but long before stardom came her way, touring with him was on her to-do list.

"It's definitely one of the things that I wanted to do in my career, is tour with him," she shared. "And it just means a lot that he's a mentor to me and he loves the stuff that we're doing and he's going to help out every way he can to make the show phenomenal."

So, will fans see some collaborations between Monáe and Prince? "We may [collaborate], we may," she teased, adding that she doesn't have a favorite Prince song. "And when that happens, I'll be sure to let you guys know." [MTV News]

Though not much is really known about these shows, Prince did promise the following list of openers/collaborators when he first announced: Maceo Parker, Janelle Monae, Mint Condition, Esperanza Spalding, Cassandra Wilson, Lalah Hathaway and Sheila E. Cassandra Wilson released a statement that was slightly more specific than Janelle. She said that she, herself, Cassandra, "will be joining Prince on stage at the Izod Center in East Rutherford, NJ on December 17th." Maybe Janelle will be at all the shows, or only one too? Prince did say the shows would be different each night.

Tickets for the recently added Prince show at MSG go on sale at noon.

And in slightly related news, being picked to play with Prince isn't the only thing Lalah Hathaway and Janelle Monàe have in common. They're both also, like Sharon Jones & the Dap Kings, on the For Colored Girls soundtrack.

Janelle and Esperanza Spalding also have at least one prior connection. They, along with Patti Labelle and Alicia Keys, paid tribute to Prince on the 2010 BET Awards. Video of that and the full For Colored Girls soundtrack tracklisting below...