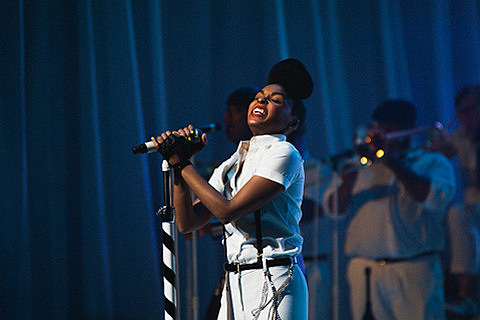 Red Hot Chili Peppers, Foo Fighters, Black Keys, Band of Horses, and The Roots are already among the artists playing Super Bowl weekend concerts, and since we last spoke, even more were announced.

VH1 is presenting the Super Bowl Blitz Concert Series which features J. Cole at Queens College on 1/27 followed by Janelle Monae at Lehman College on 1/28, and then TLC at Beacon Theatre on 1/30, in addition to concerts by Fall Out Boy, Goo Goo Dolls, and Gavin DeGraw. Tickets for the J. Cole show go on sale today (1/10) at noon. Ticket info for the Janelle Monae and TLC shows TBA, so stay tuned. Full schedule for the concert series below.

The J. Cole show happens one day before his previously announced tour hits the Theatre at MSG (1/28), which now appears sold out.

There's also another Super Bowl concert presented by Time Warner Cable Studios happening at the Highline Stages from January 27 to February 1. Those include Fox Sports 1's Thursday Night Super Bash with Kings of Leon on 1/30 and one hosted by Diddy's Revolt TV on 2/1 with Drake and Diddy. Head here for more information and a chance to gain entry to these shows.

After that show, Kings of Leon bring their tour with Gary Clark Jr. to MSG on 2/14 (tickets).