another photo that could probably use a good caption.... 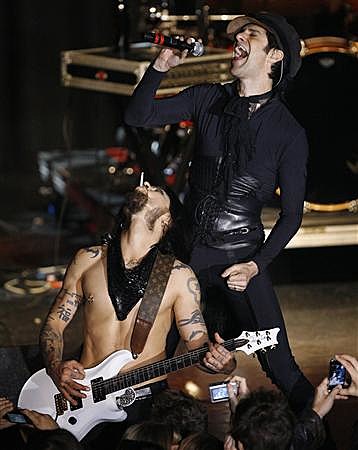 Lead Singer Perry Farrell (R) and guitarist Dave Navarro of Jane's Addiction perform at the 2008 NME Awards USA at El Rey theatre in Los Angeles April 23, 2008. The original line-up of the rock band took the stage for the first time in 17 years.

"Perry Farrell" is also playing Coachella at 2pm on Sunday. According to PerryFarrell.net, it will just be a "live electro set with Carl and Etty." Perry + Carl + Etty = Satellite Party, but maybe they don't want to call it that anymore since according to Wikipeda Extreme's Nuno Bettencourt is now a "former member". "Satellite Party" played Coachella last year.

Of course with a Perry on the bill you never know what could happen, and with this reunion and all, there are rumors (which are more than likely not true).