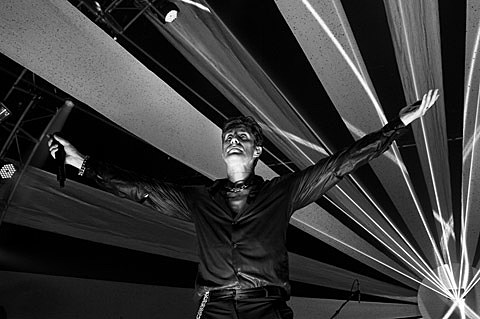 Jane's Addiction played their 2nd of two shows at Chicago's Metro last night (9/25), and we can now semi-exclusively reveal that the promised NYC club shows happening on 10/17 & 10/18 will take place at Irving Plaza. Tickets will go on presale Tuesday (9/27) at 10am EST via CitiPrivatePass.com. Tickets go on general sale Saturday (10/1) via Ticketmaster. We also have a few pairs you can win to the show on 10/18 (the same day JA's new album The Great Escape Artist is released). Contest instructions, all dates and a video from Chicago, below.

For a chance at winning tickets to see Jane's Addiction @ Irving Plaza on 10/18: Either tweet something creative that includes both @brooklynvegan & "Jane's Addiction" in the tweet, OR send an email to BVCONTESTS@HOTMAIL.COM with the subect line "Jane's Addiction" with your first and last name in the email. We'll pick winners at random and contact them with more details. Your email will not be shared with anyone else. Good luck!

Also, stay tuned to the BrooklynVegan Facebook over the coming weeks for more chances to win your way into the 10/18 show.