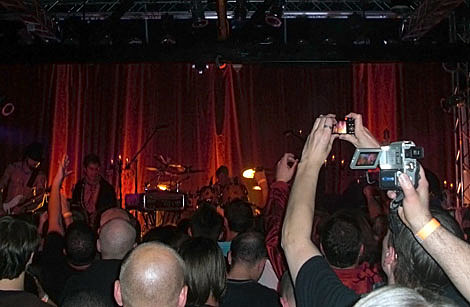 Live Nation and Adam Zacks are pleased to announce this year's line up for the Sasquatch! Music Festival at the legendary Gorge in Eastern Washington. The festival, now in its eighth and most ambitious year yet, has evolved from a unique, homegrown & low key fest into a full blown three day extravaganza. A festival-goer's dream, it comes complete with camp-outs, canyons, sunsets, three stages and new this year, an expanded comedy and dance music tent. The tent will feature performances from comedians throughout the day, and then come dusk, will spotlight electronic and dance music artists.

Already the official opener to summer for music fans, the Sasquatch! Music Festival is becoming a certified monster of a musical event: this year features another exciting and diverse line-up for the musically adventurous, and ups the ante on an event already hailed for its independent spirit. Tickets go on sale Saturday February 28th at 10AM

Jane's Addiction, reunited once again, played a show at the Echoplex in LA last night. They announced it last week via their website and mailing list.

Today it was announced that Jane's (feat. all four original members), NIN, Kings of Leon, Ben Harper & Relentless7, Yeah Yeah Yeahs, Erykah Badu, The Decemberists, Fleet Foxes, TV On The Radio, Animal Collective, Silversun Pickups, Bon Iver, Santigold, and many others are playing this year's Sasquatch Festival (May 23, 24, 25, 2009 @ The Gorge in Quincy, WA). Full lineup and ticket info below...

Camping is available for May 22, 23, 24, 25 and can be purchased online at Ticketmaster.com. For more details, directions and further information on camping at The Gorge Amphitheatre go to sasquatchfestival.com.